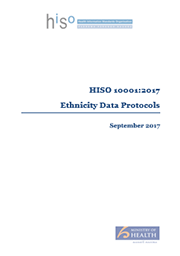 The Ethnicity Data Protocols describe the standard procedures for collecting, recording and using data on the ethnicity of people treated by or working in the New Zealand health and disability sector.

This data is routinely collected by doctors, nurses, hospitals and other health professionals. It is used to help in health research and develop new treatments for different ethnic groups.

The electronic capture of data has improved immensely since the original protocol was published in 2004 and subsequently updated in 2009. We are now able to identify many more specific ethnic subgroups (for example, Scottish, Dutch and German instead of just ‘European’ and Filipino and Malaysian instead of just ‘Asian’).

It is intended that the adoption of the Ethnicity Data Protocols by the health and disability sector will improve the accuracy and consistency of ethnicity data.

Our protocols use the Ethnicity New Zealand Standard Classification 2005 V2.1.0 and identify the minimum standards that apply across the health and disability sector. The protocols have been developed with input from a wide range of sector and government organisations.

Those vendors and organisations that have implemented an earlier version of the classification should refer to StatsNZ’s Ethnicity New Zealand Standard Classification 2005 V2.0.0 to V2.1.0 V1.0.0 and apply the necessary changes to map existing data and also update to the current ethnicity codes.