There are more than 40 different Pacific ethnic groups in New Zealand – each with its own culture, language, and history.

The summary and demographic information on specific Pacific population groups provided below are based on Census 2013. More detailed information can be found on the Statistics New Zealand website.

The 2013 Census recorded 295,941 individual Pacific people, comprising 7.4 percent of the total New Zealand population. The number of people identifying with the Pacific peoples ethnic group was up 11.3 percent from the 2006 Census population of 265,974.

The figure below shows the percentage of Pacific peoples in eight DHBs. Auckland was the biggest followed by Counties Manukau, Capital and Coast, Canterbury, Waitemata, Hutt and Hawkes Bay. 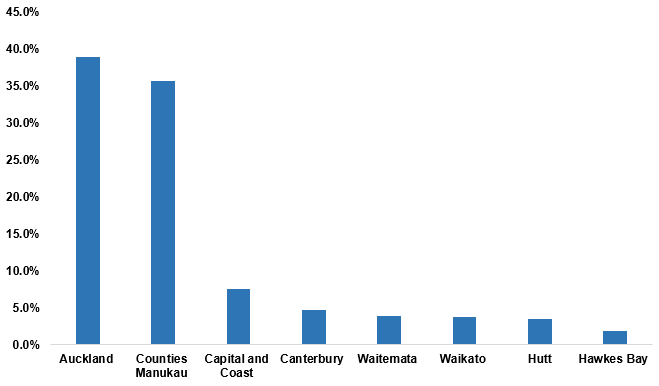 The rate of ambulatory-sensitive hospital admissions for Pacific children (0-4 years) has come down in the last decade but still high compared to the total population (Matheson et al, 2015). Ambulatory-sensitive hospital admissions is often used as a measure of the effectiveness of the interface between primary and secondary health care. The assumption is that better management of conditions within local communities and primary healthcare has the potential to reduce the number of avoidable hospital admissions (and to moderate demand on hospital resources). These conditions include, cellulitis, dental conditions, upper respiratory and ENT (ear nose and throat) infections, respiratory infections (pneumonia), gastroenteritis/dehydration, and asthma. Between 2002 and 2006, Pacific children were 1.5 times as likely to be admitted to hospital for gastroenteritis and 4.5 times as likely as NZ European children to be admitted to hospital for serious skin infections (Craig et al, 2007). Pacific children and young people (aged 0–24 years) are nearly 50 times more likely than European children (and twice as likely as Māori) to be admitted to hospital with acute rheumatic fever (ARF).

The proportion of Pacific children (2-14 years) who were obese in this age group was high at 24.8 percent, compared with 10.1 percent of the total New Zealand population. The challenge is to prevent this rate leading onto adult obesity. Two out of three (66.7 percent) of Pacific adults (15 years and above) were classified obese compared with one in three (29.9 percent) for the total population (New Zealand Health Survey).

Pacific young people were approximately twice as likely to have depression, anxiety issues, or to make suicide attempts as the rest of the population (Youth 2000 Survey. Helu et al, 2009).  While Pacific peoples were less likely to have diagnosed mood disorders or anxiety disorders, psychological distress was much higher in the Pacific population than among NZ Europeans (New Zealand Health Survey).

Adult Pacific peoples have a high burden of chronic diseases such as diabetes, ischaemic heart disease, and stroke. The incidence of these diseases is higher than that for other ethnic groups, and mortality rates for cardiovascular disease and diabetes account for a large part of the differences between the overall mortality rates for Pacific peoples and those for other ethnic groups. Pacific peoples continue to have high rates of diabetes in New Zealand. From 2006 to 2007, 10 percent of Pacific peoples aged over 15 years were diagnosed with diabetes – approximately three times the diagnosis rate for the total New Zealand population. (Health and Pacific Peoples in New Zealand, Statistics New Zealand and Ministry of Pacific Island Affairs (2011)) (New Zealand Health Survey). In addition, Pacific peoples still have higher levels of risk factors for these conditions compared with the total population (New Zealand Health Survey).

Cancer is the leading cause of death in New Zealand. The overall incidence of cancers is lower in Pacific peoples compared with Europeans, but overall mortality from cancer is higher. This difference may reflect the time when people seek medical attention, how they are treated by the health system, and difficulties accessing care. On the other hand cancers where Pacific people had higher incidence rates include gynaecological cancers, smoking-related cancers, gastrointestinal and hepatobiliary and other cancers including breast cancer. Smoking-related cancer is high in Pacific peoples, especially men (Meredith et al, 2012). Pacific peoples still have one of the highest proportion of current smoking in the country (New Zealand Health Survey). One in four (25.1 percent) Pacific adult 15 years and above was a current smoker, compared to one in six (17.2 percent) for the total population.

Unless preventative measures and treatment are tailored so that they are more effective for Pacific peoples, the incidence and impact of chronic diseases in Pacific populations will continue to grow. This places serious financial burdens on families and communities and puts pressure on their support systems. Pacific peoples are often more exposed to these disease risk factors. To improve Pacific peoples' health outcomes these factors need to be addressed through effective prevention and health-care interventions. Current interventions have been more successful in improving health outcomes among the European population. This indicates that the health system is responding inadequately to the health needs of Pacific peoples.