Our Government's Smokefree goal is that by 2025 less than five percent of New Zealanders will be smokers. This was established in March 2011 in response to the recommendations of a landmark Parliamentary inquiry by the Māori Affairs select committee.

The Smokefree Aotearoa 2025 Action Plan was launched on Thursday 9 December 2021.

The culmination of many years of hard mahi, the plan will accelerate our progress towards a smokefree future and tackle the harm smoked tobacco products cause the people of New Zealand.

A decade has passed since New Zealand adopted the Smokefree Aotearoa 2025 goal. To meet our smokefree 2025 goal significant smoking related inequities must be eliminated. Smoking rates and smoking related harm must be reduced among Māori, Pacific peoples and those living in Aotearoa’s most disadvantaged communities.

In April 2021 we released a document: "Proposals for a Smokefree Aotearoa 2025 Action Plan". A public consultation was released from April 2021 to 31 May 2021 to gather feedback on the policies to achieve the Smokefree 2025 goal.

We heard from over 5,200 groups and individuals representing diverse populations and interests. The submissions have been analysed and published, and a summary of submissions document has been published.

Smoking rates are decreasing, but there are still significant inequities for Māori, Pacific peoples and those living in socioeconomically deprived areas.

Māori smoking rates remain much higher than those for the overall population. Māori women have New Zealand’s highest smoking rates, at 32%. Māori men also have a disproportionably higher current smoking rate of 25% (Ministry of Health 2020).

View the most recent smoking data: 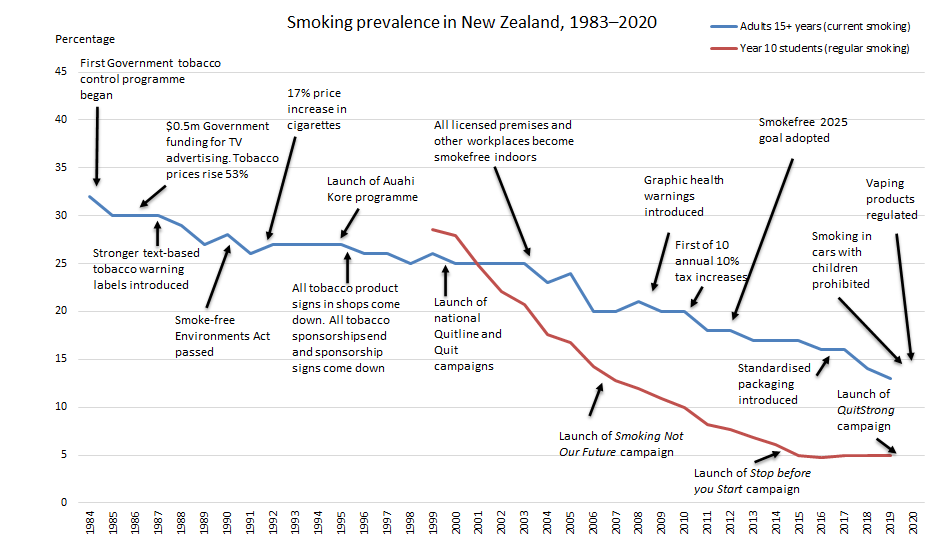