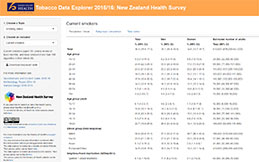 The results come from a tobacco and electronic cigarette use module in the 2015/16 New Zealand Health Survey (NZHS) which was completed by 13,781 adults aged 15 years and over. The parents or caregivers of 4,721 children aged fourteen and under answered questions on exposure to second-hand smoke. The questions were administered by trained interviewers.

The results are available by gender, age group, ethnic group and neighbourhood deprivation. Time trends data is available for some indicators.

View the Tobacco and E-cigarette Use Data Explorer.

Published data can be downloaded from the Tobacco and Electronic Cigarette Use Data Explorer as a .csv file.

If you have any queries please email [email protected]

Go to the Ministry’s Tobacco Control webpage to find out what's being done in the tobacco control area.

This overview of findings covers tobacco and electronic cigarette use results from the 2015/16 NZHS as well as time trends from the NZHS for 2006/07 to 2018/19.  Relevant findings from the 2012/13 NZHS tobacco use module are also included.

The following findings on electronic cigarette use from the 2015/16 NZHS are the most recent available:

Smoking prevalence and progress to Smokefree 2025

Four NZHS indicators can be used to assess how New Zealand is progressing towards the Smokefree 2025 goal, by comparing data from 2011/12 to 2018/19.