Health in the wider context of people’s lives

Health affects everyone, every day, and our system contributes in important ways to the overall wellbeing of New Zealanders and their families.

Health is defined by the World Health Organization as ‘a complete state of physical, mental and social well-being, not merely the absence of disease or infirmity’.

Before birth and throughout childhood, adolescence and adulthood, all kinds of factors influence a person’s ability to live well, stay well, get well and, ultimately, to experience a good end to life. As people grow older, they are exposed to various risks to their health, such as tobacco, poor housing and lack of exercise. On the other hand, they may also have or gain skills that help them to live a good life well into old age and to cope well with setbacks along the way. All these factors influence a person’s health, independence and wellbeing, including how vulnerable they are to long-term conditions.

‘Good health, starting in childhood and continuing throughout the life course, requires investment in prevention and interventions that make the environment in which children grow, learn and play a healthy one.’
–District health board

This way of thinking about health is often called a ‘life-course approach’. It highlights the way factors outside the health system strongly influence people’s health. Of course, health services such as general practices and pharmacies, immunisations and safety tests for drinking-water are important over the course of people’s lives. However, the life course approach recognises that influences outside the health system, such as home environments and participation in work, are also vital to people’s wellbeing and health.

In a similar way, good health brings benefits for other aspects of people’s lives. For example, parents who have good health and mental wellbeing can support the social development, educational outcomes and lifelong experiences of their children, and of their wider families and whānau.

Health links with the wider environment 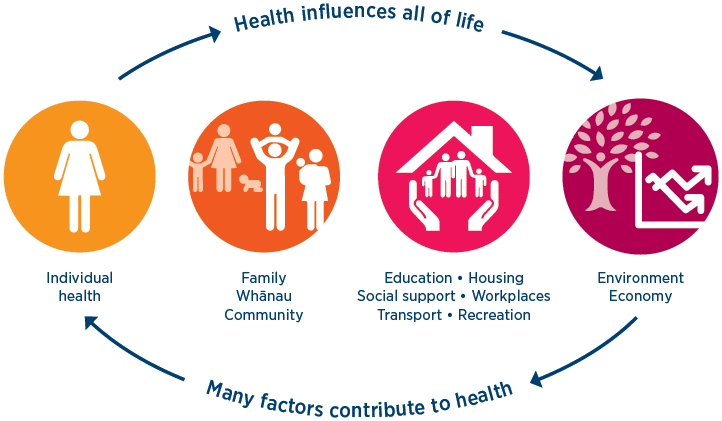 This strategy is focused on health but is set within this wider context, recognising the connections between health and other aspects of people’s lives.

Recognising this wider context is consistent with wai ora, which is an element of He Korowai Oranga, the Māori Health Strategy. Wai ora captures the idea that the environments in which we live have a significant impact on the health and wellbeing of individuals, whānau and communities.

The Government is focused on improving the lives and wellbeing of New Zealanders. Its priorities include work, across agencies, to tackle the complex and long-term problems that some New Zealand families face.

Its Better Public Services priority sets challenging targets in 10 result areas for government agencies. These include specific targets for the health system, which relate to immunisation and preventing rheumatic fever. Three other result areas in which the health system has a part to play are: reducing welfare dependency, reducing assaults on children and improving people’s interactions with government, for example, through online services.

Increasingly, government agencies are working with each other in coordinated and effective ways to respond to priority issues. Such cross-government activities are consistent with the life-course approach described above, which sees health status as an outcome of our environment and connected with other aspects of life.

Government agencies are using and sharing data more effectively to discover which individuals and community groups have the greatest needs, and they are becoming more coordinated in their responses to service users who deal with more than one agency. Agencies are also using investment approaches (described in the box below) that identify the mix of services that will result in the best outcomes for all New Zealanders in the long term.

The New Zealand Productivity Commission’s 2015 report on More Effective Social Services highlights the imperative to work differently to better meet the needs of New Zealand’s most disadvantaged people. It provides guidance to agencies to meet this goal, recognising that meeting it will involve a process of learning.

An investment approach takes into account the long-term impact of current government spending on people’s lives. Investment in the health sector that results in people having a greater ability to participate in education and employment and a lower prevalence of, for instance, alcohol and drug dependency, family violence or mental health conditions, has a positive long-term financial impact for the social sector. It also has non-financial benefit as people experience longer lives, lived in better health and independence, with greater educational achievement and with dignity. As a specific funding mechanism, ‘investment funding’ gives providers an incentive to focus on these long-term impacts and value them alongside immediate, short-term gains.

The Ministry of Health, alongside other government agencies, is working on a range of initiatives including:

The Ministry of Health has a range of other population and health strategies that provide more specific directions for particular population groups or health conditions. Updates to these strategies from 2016 onwards will reflect the direction of the New Zealand Health Strategy.

Māori experience poorer health outcomes overall than the non-Māori population and are therefore a priority group for this strategy. Consequently, an important associated strategy is He Korowai Oranga, the Māori Health Strategy, which was updated in 2014. It sets the overarching framework to guide the government and the health and disability sector to achieve the best health outcomes for Māori. He Korowai Oranga’s overarching aim, Pae Ora – healthy futures – encourages everyone in the health and disability sector to work collaboratively, to think beyond narrow definitions of health and to provide high-quality and effective services. Action taken under He Korowai Oranga is one way the health system recognises and respects the principles of the Treaty of Waitangi.

For similar reasons, ’Ala Mo‘ui: Pathways to Pacific Health and Wellbeing, a strategy for improving the health of Pacific peoples, is of key importance in achieving the goals of the Strategy. A central part of the vision of ’Ala Mo‘ui is equitable health outcomes for Pacific peoples.

The New Zealand Health Strategy in its government context 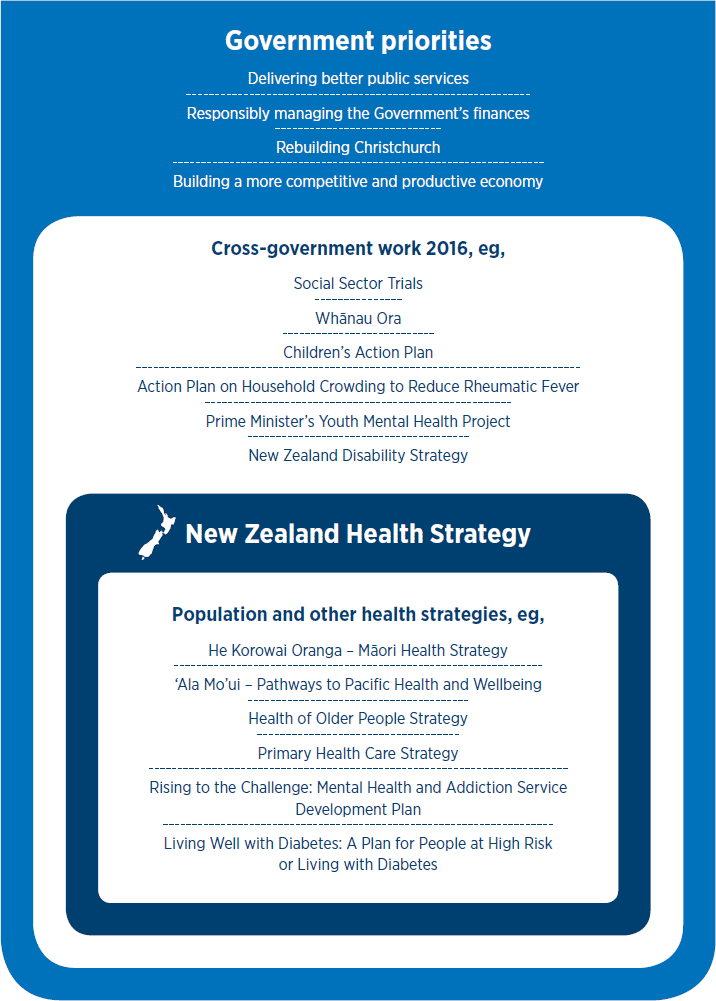 Why a health strategy? Up to First page Challenges and opportunities