The Protocol to Eliminate Illicit Trade in Tobacco Products is the first protocol to be negotiated under the World Health Organization Framework Convention on Tobacco Control (WHO FCTC).

The Protocol was developed to help mobilise a global response to illicit trade in tobacco products. It was negotiated over a 5-year period and was finalised in 2012. New Zealand was involved in its negotiation.

The Government undertook a consultation process to inform its decision-making about whether New Zealand should agree to become a party to the Protocol.

On 23 May 2017, the Government made the decision to defer consideration of New Zealand becoming a party to the Protocol to Eliminate the Illicit Trade in Tobacco Products until there are changes in circumstance that warrant reconsideration.

New Zealand’s existing laws already comply with many of the obligations in the Protocol. Although findings from the public consultation and the cost benefit analysis are generally favourable, illicit tobacco trade is currently not a significant problem in New Zealand. If New Zealand became a Party to this Protocol, some legislative reforms would be required, along with new systems, processes and initiatives to support them. Further work and information is needed to fully consider the implications for New Zealand of becoming a Party.

In the meantime, the Ministry of Health will continue to monitor domestic and international developments around illicit trade.

More information about what is in the Protocol and what it could mean for New Zealand is provided in:

What is illicit tobacco?

Why are we concerned about illicit trade in tobacco?

The illicit trade in tobacco impedes public health policies to cut smoking using price levers. Illicit products are usually cheaper than legal (taxed) tobacco. Smokers using illicit products may be less inclined to quit, and non-smokers may be more likely to take up smoking if they have access to cheaper tobacco. Other concerns include:

What is the international community doing about it?

A new international agreement (the Protocol) has been negotiated under the existing Framework Convention on Tobacco Control (WHO FCTC). This new agreement aims to prevent illicit trade in tobacco. Countries are now deciding whether or not to become a party to it.

What is in the Protocol?

The Protocol contains a range of supply control initiatives including requirements around due diligence, licensing, record keeping, and an obligation for countries to develop a tracking and tracing system for tobacco products).

There is also an emphasis on international collaboration and information sharing, and countries are encouraged to support each other in areas such as mutual legal, administrative, technical, and enforcement assistance.

The diagram below summarises the key parts of the Protocol. 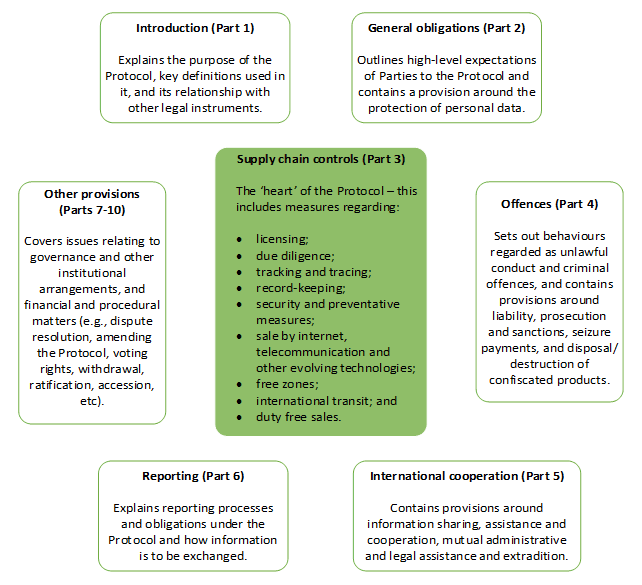 More information is contained in the Summary of the Protocol (Word, 76 KB).

Is illicit trade in tobacco a significant problem in NZ?

No. It is thought to be only about 2–3% of the tobacco market. It is a much bigger problem internationally, however, such as in parts of Europe and Asia.

However, illicit trade in tobacco is a global problem. New Zealand participated in the negotiation of the new Protocol and we now need to decide whether or not to become a party to it. In addition, to future-proofing our system, there are wider issues to consider, such as New Zealand’s international reputation and ongoing commitment to global tobacco control efforts.

What government agencies have an interest in this work?

The Ministry of Health is the lead agency for tobacco control policy including work to implement the WHO FCTC. The Ministry of Health led the New Zealand delegation during the Protocol’s negotiations. They concern for the Ministry from illicit trade is that it could adversely impacts on public health policies to reduce smoking rates.

Other agencies are also interested for other reasons. For example, the New Zealand Customs Service has border control and revenue collection responsibilities, which include ensuring the correct excise is paid on tobacco products. The Ministry of Justice is responsible for administering a number of criminal justice laws covering issues such as extradition and mutual assistance between countries, which are covered by the Protocol. The New Zealand Police is interested from a crime prevention and law and order perspective. The Ministry of Foreign Affairs and Trade has an interest from and internal relations perspective and is concerned about potential trade implications.

Why did the Ministry consult on the Protocol?

The purpose of the consultation was to obtain feedback and information from stakeholders to help inform Government’s consideration of its response to the Protocol.

The information from the consultation was used to inform a cost benefit analysis and an analysis to consider the pros and cons for New Zealand of becoming a Party to the Protocol.