The Cancer Control Agency is a departmental agency hosted by the Ministry of Health, that will provide strong national leadership for, and oversight of, cancer control in New Zealand.

The Agency will drive the implementation of the Cancer Action Plan 2019–2029, which focuses on equity and delivering nationally consistent services for all New Zealanders, no matter who they are or where they live.

Key priorities for the Agency include providing strong accountability, coordination of various agencies involved in cancer, and working to implement the Cancer Action Plan.

The Agency is working closely with people impacted by cancer, including their whānau and healthcare professionals. The Agency is also actively working with Māori and Pacific leaders to ensure that they inform the work of the Agency and how we can best engage with them to meet their needs.

A Cancer Control Agency Advisory Council has been established to support the leadership and ongoing direction of cancer control in New Zealand.

An Interim Chief Executive, Professor Diana Sarfati, was appointed by the State Services Commissioner on 1 December 2019 and will be responsible for delivering the outcomes identified in the Cancer Action Plan. The Agency will operate independently, and the Chief Executive will be accountable directly to the Minister of Health. 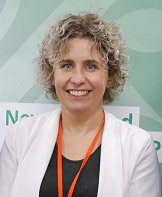 Diana was appointed as Head of the Department of Public Health in 2014, and is the Director of the Cancer and Chronic Conditions (C3) research group at University of Otago, Wellington. She has led a large body of research relating to ethnic disparities in cancer outcomes, particularly those affecting Indigenous peoples. This work has resulted in the identification of key patient and health system factors that influence cancer survival. It has been used extensively by health policy makers, clinicians and other researchers to develop policies and practices that aim to reduce inequities in cancer outcomes.

The Agency is establishing five teams to deliver to the commitment areas defined in the Cancer Action Plan: