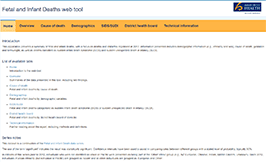 The Fetal and Infant Deaths web tool presents a summary of fetal and infant deaths, with a focus on deaths and stillbirths registered in 2018. Information presented includes demographic information (eg ethnicity and sex), cause of death, gestation and birthweight, as well as deaths classified as sudden infant death syndrome (SIDS) and sudden unexpected death in infancy (SUDI).

About the data used in this edition

This dataset is a continuation of the Fetal and Infant Deaths series.

At the time the data was extracted there were 14 infant deaths awaiting coroners' findings. These deaths may be assigned a provisional code based on limited information available at the time, while deaths with no known cause awaiting coroners’ findings are coded to R99, ‘Other ill-defined and unspecified causes of mortality’, or X59, ‘Exposure to unspecified factor’. Deaths for which a cause is still to be determined or confirmed will be updated in the next edition of Fetal and Infant Deaths as the coroners complete their findings.

This web tool presents data to the latest year for which data is available for publication. We have quality checked the collection, extraction, and reporting of the data presented here. However, errors can occur. Please contact us through the Data Services team at the Ministry of Health if you have any concerns regarding any of the data or analyses presented here. The Ministry of Health makes no warranty, expressed or implied, nor assumes legal liability or responsibility for the accuracy, correctness or use of the information or data in this tool.

Use our web tool to explore these statistics: