When 27-year-old Raymond moved into his own home in February this year, he was fulfilling a five-year dream. 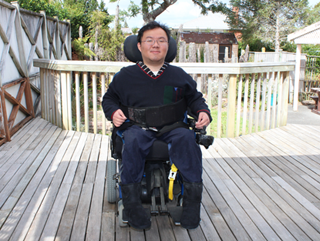 CiCL has given Raymond the confidence to start socialising again and to try new things.

Using the Ministry of Health’s Choice in Community Living (CiCL) demonstration, he left his family home in Auckland and shifted into a three-bedroom rental.

‘I see myself as the first penguin to jump into the sea – you could get eaten by sharks or whales but I’m still here.’

Since moving into his new place, he has not only avoided any ‘sharks or whales’, but thrived.

‘I finally feel like I’m living my own life,’ he says.

Before he knew about CiCL, he would often spend hours playing computer games and watching TV dramas when he wasn’t studying. ‘I was really wasting my time. When it came to life I was a bit clueless.’

But the 'hope and independence' that CiCL offers has given him the confidence to start socialising again and to try new things. ‘I started talking to friends on Facebook that I hadn’t talked to for ages. I have been busy with much more interesting things and I haven’t been playing games for the last three or four months.’

Raymond is studying for a Master of Finance and recently attended the 2014 Muscular Dystrophy Northern family camp. ‘I’d never been before. I got to meet and talk to people. Next week I’ll go to meet a few of those people. I’m going to do all the things that I used to miss out on.’

Raymond is using song writing as a way to share his experience of CiCL. ‘I have written a song for my parents. It’s about me moving out.’

While his parents were initially concerned about how he would manage living on his own, they have since realised how well he is coping.

It took about six months for Raymond to get set up – from choosing a service provider to finding an accessible house to selecting his support staff. But his facilitators at CCS Disability Action, Renah and Getahun, have always been there if he has wanted help.

They assisted Raymond with hiring his five support workers, who share a roster, and went with him to view the house he now lives in.

Although Raymond currently receives 24-hour support on weekdays, his long-term goal is to have more time on his own. ‘I want to learn to become independent. I want to learn how to manage my own life.’

He also wants to join Toastmasters to improve his communication skills, and to do a bit of travelling. ‘There are a lot of places I want to go.’

Renah says that when she first met Raymond he was ‘very quiet’. His confidence has grown hugely in the last six months, she says.

'We celebrate Raymond’s successes together and we are there to support him in times of difficulty when he needs us,' Renah says. 'Our goal for Raymond is for him to realise and achieve the life that he dreams.'