With the support of his Local Area Coordinator, Kelvin says he has gained the confidence he needs to move forward with his life. He shares his story.

A year ago, Kelvin says he had reached a point where he was unhappy with how his life was unfolding but was unsure how to plan for something better.

His local medical centre had heard about how Local Area Coordinators work alongside people with disabilities and their families/whānau and so referred Kelvin to Katikati-based LAC Debbie Davidson. 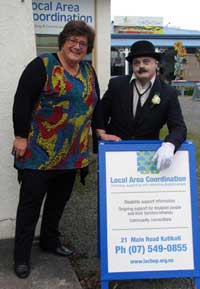 At first, Kelvin was reluctant to open up to Debbie but gradually the two began to talk about Kelvin’s aspirations and dreams.

“We started talking about what he wanted to do. He felt like he had run out of places to go and so we started to discuss how he could reconnect with the community,” says Debbie.

This has led to big changes in Kelvin’s life.

For some three or four months now, Kelvin has been attending a local Toastmasters group where he is encouraged to take part in table topic speeches. “I have really noticed the difference in him,” says Debbie. “His confidence has improved so much – and continues to improve.”

With Debbie’s encouragement, Kelvin has also found more opportunities to perform as his favourite character – Charlie Chaplin – at various festivals and parades.

Kelvin would like to meet more local people so Debbie works with him to find other groups he can get involved with, particularly ones with a performance aspect since this is something he enjoys. For example, he recently met up with a local medieval group whose members dress in period costumes and re-enact events like medieval feasts and tournaments.

The two continue to meet regularly to talk through other matters in Kelvin’s life, such as work and housing issues. “He is feeling a lot better about himself now,” says Debbie.

As a result of meeting Debbie, Kelvin says he wouldn’t hesitate to recommend Local Area Coordination for others living with disabilities like his own. “If you need someone to talk to, then contact your Local Area Coordinator: they can help you to reach your goals,” he says.

The Ministry of Health’s New Model for Supporting Disabled People is a new way of helping disabled people achieve their goals and have more choice and control over supports and funding in their everyday lives.

Local Area Coordinators walk alongside disabled people and their families to help them plan for a good life. They help disabled people to reach their goals by providing them with information and building relationships with the community. They also assist communities to include and welcome disabled people.