Glen and Alex always knew they would one day go flatting. 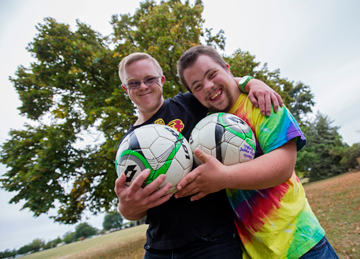 They achieved their dream last year, when they moved out of their family homes and into their own place through the Ministry of Health’s Choice in Community Living (CiCL) demonstration.

Glen, 23, had been waiting for his best friend to turn 21 so they could embark on their flatting adventure. His older sister had done the same, so he knew that was the next step, his Mum Linda says.

‘He wanted a bit of independence and he wanted his own time and space,’ his Dad Gary says.

Alex, now 22, felt the same. ‘Once he left school and started at Community Living Trust and the Transition to Employment programme, it was just the next progression to go flatting,’ his Mum Nicky says.

The young men have been best friends for many years and say their flatting experience so far has been ‘awesome’. ‘It’s been awesome flatting with Glen, doing our own cleaning chores, rosters, having a fun time and chilling out,’ Alex says. ‘We’re basically brothers because we’re awesome and have a fun time together.’

Alex: Before I started flatting I was living at home with Mum and Dad, Russ and Nicky and now it's a great change for me  when I'm now flatting.

And it's been awesome flatting with Glen living with him, doing our own cleaning chores, rosters, having a fun time, chilling out - awesome.

I can do much more since I was living at home.

Alicia - Community Living: I met Glen and Alex two years ago when I got a job with Community Living as a team leader and they were in my service, Transition to Employment, and since I've known them for so long when the opportunity came up for them to go into the Choice in Community Living programme they chose me to be their facilitator. So I've been involved from the get go in meeting with the families and creating path plans and creating care plans for the guys.

[Video of Alicia playing guitar with Glen and Alex]

Linda - Glen's Mum: Well Glen has an older sister who left home a while ago and has been flatting so he knew that that was the natural progression.

They've always said 'we are going flatting together'.

Last year the time was right, and we started looking round for options for them to do that.

Alex: The reason why I'm in Choices is to have that facilitator Alicia to get involved with what we have been doing and it's been awesome having her around helping us out and supporting us in how we do stuff.

[Video of Alicia playing guitar with Glen and Alex]

Alicia: Glen and Alex, right now, have two women who support them in their home. And, we were really worried about not having too much support because the guys are really independent.

So the staff come in only in the mornings for an hour and a half to just make sure the guys are all good setting up their breakfast and getting ready for the day.

And then at the end of the day they'll come back and just kind of be here while the guys make dinner and tidy up and make plans for the next day. It's really, really low key and the staff are only here when the guys have chosen.

Alex: We interviewed them as a goal of being a part of our flatting and we hired them and they were the best fit to be able to become our support staff.

Alicia: They've both really come out of their shell. They're more outgoing. They're involved in community events and community groups such as People First. They're independence in general has really increased so they catch the bus independently by themselves in the mornings, they don't have staff support to do that.

Alex: Since Glen and I went flatting last year we decided to work things through.

If any problems, we just work it out by talking and discuss what went wrong and do the cleaning together as a team and get it done.

We pretty much have the same interests. Like, we go play pool, bowling or something that we both have interests in.

[Video of Glen and Alex playing pool and playing guitar]

And it's awesome what we're doing now.

Alex and Glen rent a three-bedroom house that was built by Accessible Properties. They are looking for another flatmate, but in the meantime are enjoying having more choice and flexibility with CiCL. They have weekly flat meetings to discuss their cleaning and meal rosters, talk through any issues and plan for the week ahead. Their budgets are sorted out with help from their Mums.

Their two support workers, Elleisha and Stevie, were hired with assistance from Alicia, their facilitator at Community Living. Alicia supported them in writing the advertisement, interviewing candidates, going through the hiring process and training the staff.

Alicia met Glen and Alex when she joined Community Living two years ago.

‘It’s been awesome having Alicia around helping us out and supporting us. She’s really awesome,’ Alex says.

They are also very happy with their staff, who visit in the mornings and evenings while Alex and Glen prepare meals and make plans for the week.

Their parents have taken a step back when it comes to the day-to-day arrangements. ‘When I come to visit it’s to come and have a cup of coffee or to go and do something,’ Nicky says. ‘It’s great.’

Alicia says Alex and Glen are more outgoing and more involved with community events and groups since being part of CiCL. ‘Their independence is increasing all the time. They catch the bus by themselves in the mornings and afternoons and also to activities in the evenings. They have a lot more self-confidence.’