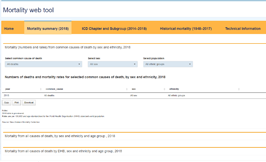 The Mortality web tool presents mortality and demographic data for selected causes of deaths registered in New Zealand from 1948–2018. Information about all deaths by ICD Chapter, ICD Subgroup, ICD three-character codes and demographics is available from 2014–2018.

The web tool enables you to explore trends over time using interactive graphs and tables. Filtered results, data dictionaries and full data sets can be downloaded from within the web tool.

Data for 2017 (external causes of death only) and 2018 is provisional. Data for all other years is considered complete, but subject to regular updates.

About the data used in this web tool

This data is sourced from the Mortality Collection.

The web tool will be updated as required during 2021 as coroners complete their findings.

Ethnic breakdowns of mortality data are only shown from 1996 onwards because there was a significant change in the way ethnicity was defined, and in the way ethnicity data was collected in 1995. For more information please refer to the Ministry of Health report,  Mortality and Demographic Data 1996, (pdf, 600 KB)

In this web tool, mortality data was extracted and recalculated for the years 1996–2018 to reflect ongoing updates to data in the Mortality Collection and the revision of population estimates and projections following each census. For this reason, there may be changes to some numbers and rates from those presented in previous publications and tables.

We have quality checked the collection, extraction, and reporting of the data presented here. However, errors can occur. Contact the Ministry of Health if you have any concerns regarding any of the data or analyses presented here, at [email protected]

Use our web tool to explore these statistics.