Chapter reviewed and updated in October 2018. A description of changes can be found at Updates to the Communicable Disease Control Manual.

Despite rates dropping significantly in recent years since the meningococcal B epidemic and vaccination programme, there are still a number of cases of invasive meningococcal disease in New Zealand each year and sometimes community outbreaks. As with the epidemiology in other temperate climates, there tends to be a seasonal pattern, with more cases seen in winter and spring.

Meningococcal disease is a serious invasive disease with an acute onset and may start as a mild flu-like illness and rapidly progress to fulminant septicaemia and death. Cases typically experience acute fever, malaise, nausea, myalgia, arthralgia and prostration. A rash occurs in about two-thirds of cases – this may be ill defined and macular, petechial or purpuric. More severe infection leads to shock, disseminated intra-vascular coagulation (DIC), acrocyanosis and multi-organ failure.

Other locations of invasive disease with Neisseria meningitidis are possible though rare, such as orbital cellulitis, septic arthritis, and pericarditis.

Nasopharyngeal carriage of meningococci is relatively common, in roughly 15 percent of the population, and is generally more prevalent in young adults, people who are living in conditions of severe overcrowding (Baker et al 2000), smokers and military recruits.

The events that cause meningococcal disease are poorly understood but include a combination of organism, host and environmental factors (Stephens 1999).

Laboratory confirmation requires at least one of the following:

Although not meeting the definition of a confirmed case, meningococcal infection of the conjunctiva is considered an indication for public health action because of the high immediate risk of invasive disease (refer Health Protection Agency 2011). Other sites may also require public health follow-up on a case-by-case basis, as determined by the local medical officer of health.

Transmission is from person to person through droplets or secretions from the upper respiratory tract, from a carrier or case.

Therapy with rifampicin, ceftriaxone or ciprofloxacin eradicates N. meningitidis from mucosal surfaces within 24 hours, and the case is no longer considered infectious.

Attending medical practitioners or laboratories must immediately notify the local medical officer of health of suspected cases. Notification should not await confirmation.

Obtain a history of vaccination and possible contacts.

Obtain a history of any antibiotic treatment, to help clarify if there may be partially treated disease.

Ensure laboratory confirmation has been attempted, including strain identification (group and subtype).

Droplet precautions until 24 hours after the start of ceftriaxone, rifampicin or ciprofloxacin. Close contacts do not require isolation even if they are taking prophylaxis.

Parenteral antibiotics should be administered to all cases as soon as meningococcal disease is suspected before admission to hospital or in hospital if delays and assessment in hospital are likely to be more than 30 minutes. See the latest edition of the Immunisation Handbook (Ministry of Health 2017).

It is important that the case receives an antibiotic that will eliminate throat carriage before discharge from hospital, usually rifampicin, ciprofloxacin or ceftriaxone. Unless one of these has been used in the course of treatment, it should be prescribed for the index case before discharge.

There are currently no specific recommendations for vaccinating cases with meningococcal vaccine, other than the general immunisation recommendations – see ‘Health education’ below and the Immunisation Handbook (Ministry of Health 2017).

Advise the case and their caregivers of the nature of the infection and its mode of transmission.

Anyone who has had unprotected contact with upper respiratory tract or respiratory droplets from the case during the 7 days before onset of illness to 24 hours after onset of effective treatment.

Public health follow-up is most important for household contacts and contacts that have had similarly close exposure. Examples of such contacts are:

Note: Unless one of these criteria is met, low-level salivary contact such as kissing on the cheek or mouth or sharing food or drink does not require public health follow-up or treatment (given evidence that it does not increase risk of transmission).

If the case has been treated with an effective antibiotic for at least 24 hours before death, any contact risk is low. If the case has not been treated, then occupational contacts should follow routine infection control practices with additional droplet and contact precautions.

Kissing the body is not considered a risk. Body bags are not necessary, and transport to other countries for burial or cremation does not pose a risk. There is no restriction on embalming.

Laboratory workers who handle high concentrations or large quantities of organisms or are routinely exposed to isolates should be protected with the quadrivalent vaccine.

Nil. Routine throat or nasopharyngeal culture of contacts is not recommended because asymptomatic carriage is common.

Antibiotic prophylaxis should be given as soon as possible (ideally within 24 hours) after the diagnosis of the index case. After 24 hours, chemoprophylaxis (and vaccine if appropriate) should still be considered for close contacts; however, there is little value in offering this more than 14 days after the diagnosis of illness (there is a low risk of further cases after this period, see CDC 2005b).

The purpose of antibiotic prophylaxis is to eradicate nasopharyngeal colonisation by meningococci and thus prevent transmission to other susceptible people. Prophylaxis will not treat illness that the person may be incubating, so it is essential that the contacts be advised to seek urgent medical attention if they become unwell.

Consult Medsafe data sheets for appropriate use and dosages of ciporofloxacin in children. Treatment in children should only be initiated after careful benefit/risk evaluation and prescribing health practitioners should ensure they are familiar with their responsibilities when prescribing a medicine for ‘off-label’ use.

Immunisation is recommended for unimmunised contacts (as defined above) of a case of group A, C, W135 and Y disease, preferably within 1 week of diagnosis of the index case, but can be considered up to 4 weeks. Ideally the strain, or at least the group, should be determined first; therefore timely laboratory results are important. If there are delays in grouping or this is not possible, consider using a quadrivalent vaccine (if over 2 years of age).

Conjugate vaccine has been shown to reduce nasopharyngeal carriage and is therefore the preferred type of vaccine for contacts of meningococcal disease (conjugate vaccines are currently available for group A, C, W and Y in New Zealand).

Current meningococcal vaccines have short-term efficacy, estimated to be around 3 to 5 years.

Discuss immunisation in the outbreak setting with the Ministry of Health Communicable Diseases and Immunisation teams.

If case is group B

In a multi-occupancy residential meningococcal B outbreak an emergency supply of meningococcal B vaccine (Bexsero) is available for use and will be supplied under section 29 of the Medicines Act 1981.

The process for obtaining the vaccine is as follows. 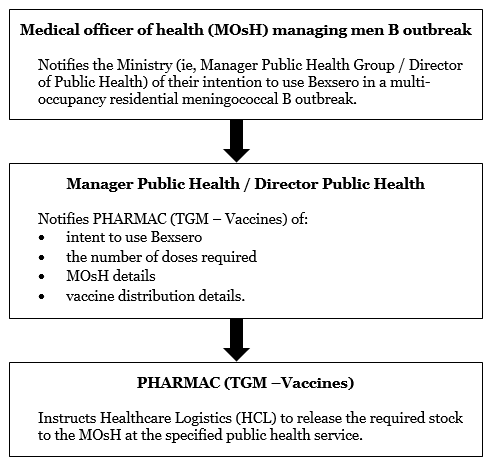 Under this scenario, HCL will be responsible for the supplier requirements of section 29, and the MOsH will be the prescriber under Section 25 of the Medicines Act 1981.

Information on revaccination is limited, but it may be appropriate for individuals with ongoing higher risk. See the Immunisation Handbook (Ministry of Health 2017) for more details.

All contacts should be encouraged to seek medical advice if symptoms develop, especially fever and petechial rash.

Management of contacts when there are large groups involved

In instances where large groups of people have been exposed to a case, it is likely that contacts will have returned to a variety of health districts. Any follow-up needs to be coordinated by the appropriate medical officer of health to ensure that districts provide consistent advice and treatment.

The aim of the intervention in such settings is to eradicate carriage of the strain from a population at high risk. The medical officer of health determines necessary action in discussion with the Ministry of Health.

Check for other cases in the community. Do not perform screening cultures because asymptomatic carriage is common.

Clean and disinfect surfaces and materials soiled with respiratory secretions.

Key messages include being aware of signs and symptoms, and the importance of early medical advice and treatment.

Ensure people are aware of the availability of and recommendations for meningococcal vaccines.

General recommendations for meningococcal vaccination are for:

It is also recommended, but not funded, for:

See the Immunisation Handbook (Ministry of Health 2017) for more details.

If a cluster of cases occurs, inform the Ministry of Health Communicable Diseases Team and outbreak liaison staff at ESR, and complete the Outbreak Report Form.