Part B of the Settlement covers regularisation of the home and community support workforce and future models of care.

The In-Between Travel Settlement was agreed by:

The obligations of providers under Part A of the Settlement are now included in the Home and Community Support (Payment for Travel Between Clients) Settlement Act 2016.

Part B of the Settlement deals with the regularisation of the home and community workforce. An aspect of regularisation is guaranteed hours (including costs of client cancelled visits). This is covered in the second Variation.

The Ministry engaged with the settlement parties and key stakeholders to agree the actions, processes and timelines below. 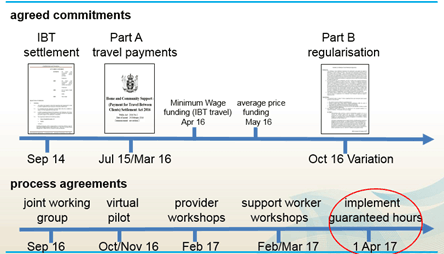 A specific email account has been set up for enquiries at [email protected] which is cleared and responded to regularly.