‘It all comes back to LAC’ for Tanya 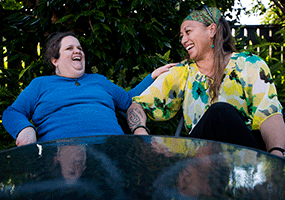 I moved into Te Puke a year and a half before I met Larissa, my Local Area Coordinator (LAC). My life was getting up, having a couple of hours of support in the morning and then this long day loomed ahead of me.

Everyday was the same. I didn’t really have that much company and I couldn’t go anywhere. I felt really caged and there was that frustration on top of the lack of stimulation that made life really difficult.

At that first meeting with Larissa I felt that there was going to be a chance of things getting brighter. I was a bit trapped in thinking ‘this is too good to be true’. After the third meeting, I started to see light at the end of the tunnel.

Knowing that someone was actually listening, I started working out what I wanted to do with my life – what my life would look like if we could wave a magic wand. Often Larissa would plant a seed, give me an idea and I’d think about it and then come back to Larissa and say ‘what if we do this?’

Tanya is living life her way with the support of her Local Area Coordinator (LAC) and Enhanced Indivisualised Funding (EIF).

Tanya, singing: ‘But with you I felt so different from the moment that we met. So wherever life may take us, there’s one thing I won’t forget.’

[Interview with Tanya, intercut with scenes of her greeting Larissa and having her in for a cup of tea.]

Tanya: Basically 4 days a week my life was getting up, having a couple of hours of support during the day, usually in the morning, and then this long day loomed ahead of me. I didn’t really have that much company either and I couldn’t really go anywhere so I actually also felt really caged. So there was that frustration on top of the lack of stimulation that made it really difficult.

Larissa Clarke, Local Area Coordinator: Generally the first thing I try and do is trying to connect and that’s through a cup of tea, that's through conversation so some of the stuff we did was around what are some things that Tanya’s wanted to do but hasn’t being able to do for so long – or things that Tanya’s interested in and would like to look at doing and basically it was looking at giving her a purpose to get up in the morning and a reason to get up.

Tanya, singing: ‘In my mind I felt so small. There were times when I had wondered would there be no love at all.’

[Interview with Tanya, intercut with footage of her sitting down to work at the computer and shots of Māori carvings.]

Tanya: So the things we started to work on were what I was actually going, what my life would look like say if we could wave a magic wand and have everything. Larissa would plant a seed. She’d give me an idea and then of course she’d go and I would sit there and think about it and then I would come back to Larissa and go, ‘Hey, Larissa I’ve though about what you’ve said and yeah I think it’s great and what if we do this?’ I realised that my passion was to learn all I could about Māori culture so that’s what I'm studying through the Open Wānanga.

[Interview with Larissa, intercut with shots of Tanya unrolling her computer keyboard and working at it.]

Larissa: So part of my role was coming in and reading through some of the study material, and looking at what Tanya needs to apply and register with the tertiary institution – the paper work that was required, finding the JP to sign some of the forms and verify her passport pictures for the studies, and the next step was looking at from this study what's going to open up for her to do for future studies or even other experiences this might lead on to.

[Interview with Tanya, intercut with footage of her playing with her dog.]

Tanya: Well the Whānau Show, it started out and still is a radio programme that is on the Iwi Station on Friday and Sunday nights and I really feel it’s like a radio community. The connections I have made through the Whānau Show have actually been the biggest life-changing thing in my life. But I still say it all goes back to LAC and Larissa’s role because if I hadn’t gone down this path of doing my studies, I wouldn’t have found out about the Whānau Show.

[Footage of Tanya at the keyboard, then opening up her laptop and going on Facebook.]

Tanya: Larissa knew I was having a lot of problems with my old computer which stopped me from doing certain things and my study and also just generally socialising because it was getting so out of date I couldn’t do most things online. Often when a blind person buys a computer it works out dearer than someone else buying one because we need the extra memory and the extra performance capabilites.

I was able to use my EIF (Enhanced Individualised Funding) for the whole lot. EIF has allowed me to, basicially, to go where I need to go and to do what I need to do. It’s a flexible way of privately being able to employ people as support workers. You’re able to claim the funding to meet your support needs.

[Interview with Larissa, intercut with footage of Tanya using a braille display.]

Larissa: When I first meet Tanya things weren’t very good. Anxiety was high. Ability to cope with new things was difficult. As she’s become more empowered and confident in herself to make her own decisions and decide who she wants in her life and when, and what’s safe for her and what isn’t, her life’s taken on a whole new path. So I initiated the first steps and she took care of the rest.

Tanya, singing: ‘So, I’ll hold you close tonight, everything’s alright, for ever more.’

Title: ‘Your Love’ written and performed by Tanya

That’s the sort of process we went through for me to get into my study. It was the first big thing that Larissa and I worked on. My passion was to learn all I could about Māori culture. When I was 11 I left New Zealand for 20 years and went to Australia. My biggest regret was not learning Te Reo. Talking things through with Larissa, it reignited that fire.

I’m doing the Mauri Ora course through the Open Wānanga now. When all the forms came in the mail, this is where Larissa came in. Getting the right equipment was also a very frustrating process for me. Larissa was there so I could talk to her and she just helped me keep my morale up.

If I hadn’t gone down the path of doing my studies, I wouldn’t have found out about the Whānau Show. The Whānau Show is an iwi radio programme where people call in and they help each other. I really feel like it’s a radio community.

The connections I’ve made through the show have been the biggest life-changing thing. Twice a year they have a roadshow somewhere. The people I’ve met there have given me a true sense of whānau because my own whānau is quite disconnected.

I’m going back to Whānau Show for the second time this year with one of my support workers because she’s from Gisborne where they’re having it. My kaitiaki from the wānanga has asked me to pick an iwi to study and I thought ‘here’s a good reason to talk to the iwi up the East Coast while I’m there’. I’m going to learn about the local Ngāti Porou iwi.

Larissa has introduced me to a flexible way of being able to employ people as support workers. I’m able to use my Enhanced Individualised Funding (EIF) to help me go to Whānau Show. It covers my support worker’s time and mileage. The flexibility makes it great. EIF has allowed me to go where I need to go and do what I need to do. It turns your thoughts into reality.

In the past there were a lot of rules about what you could and couldn’t do but with EIF I can do things like deliver the flyers in my neighbourhood for our Neighbourhood Network. I collect the data for it and my support worker can come with me now to put the flyers around.

I’ve met quite a few neighbours and one of them is a very close friend who has enriched my life in a lot of ways. Being able to give something back is just the biggest boost of confidence I could ever wish to have. I like to think about those people who I know are on their own and are actually more housebound than me.

In the end, it all comes back to Local Area Coordination. Larissa has helped me to fill in the gaps in my life. I’m really excited about the future now.

Read more about the people who have started using the Ministry of Health’s New Model for Supporting Disabled People in the New Model People Stories section.