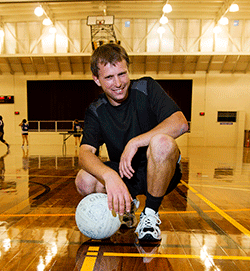 Stephen is helping a customer load his trailer on a hot Tauranga day in the yard of Tweed’s Trading Company. He enjoys the physical work and the conversation.

“To me it’s my dream role and it’s got a bit of everything I want. I can do my own thing. I can go serve a customer and there is always something to do,” he says.

Stephen is on the Autism spectrum. He was having trouble finding regular work before starting at Tweed’s in a voluntary role. He also wanted to move out of home but wasn’t sure how to go about it. After finding out about Local Area Coordination (LAC) through Spectrum Care, Stephen began working with his LAC Jenny.

“It was time for a change. Things had got a bit tense for me. I heard about Jenny and things went from there,” he says.

At their first meeting, Stephen voiced his frustrations about living at home. His main aim was to go flatting. Jenny talked with Stephen and his mother, and together they made a step-by-step plan for moving out.

“We had a few chats, with Mum as well, and looked at what the expectations were for moving out of home. We came up with some really clear ideas which we made into a list – that’s what seemed to work for Stephen,” Jenny says.

Stephen is living life his way with the support of his Local Area Coordinator (LAC).

[The video starts with Stephen at work, cleaning up old window frames and then in the workshop with his coworkers. He bikes home from work. The video cut between showing Stephen at home and an interview with his Local Area Coordinator.]

Jenny Dawber, Local Area Coordinator: My role as Stephen’s LAC was about connecting him with the right people in the community that could help him get the new home, get him the independent life away from home. We had a few chats and with Mum as well including what kind of expectations that she had for Stephen moving out of home. And also for Stephen what that might look like. And we kind of starting coming up with some really clear ideas which in the end we wrote down into a bit of a list because that’s what seemed to work for Stephen.

Firstly we started with what kind of home he wanted to be living in, how many people he wanted to live with. Whether that started to give Stephen a picture of what his new home might look like and then we kind of set out the practical steps of how he would get there. I guess through following those steps that he kind of developed and we wrote down, he was able to start going forwards, moving in a direction that would get him to where he wanted to be.

Stephen: Instead of always having to turn to my Mum and Dad all the time, I know that I’ve always got Jenny that I can turn to. If I get a bit stuck on something or just anything general, I can just sort of turn to Jenny and she can help me out.

[Shot of a sign for Tweed Trading, Building Resource Centre – Recycled Building Materials. Inteview with the owner, intercut with shots of Stephen at work.]

Malcolm Tweed, Tweed Trading Owner: I think he cycled into my work one day when we were over in Judea. He was kind of cheeky and he said ‘got any jobs’, or something like that. But he was eager to be something more than what he was and he was inspired to do something. Our work has lots of variety and challenges - Stephen seems to thrive on those. And I see the way he’s going – if anything I need to put a reign on him because he is so eager.

[Back to the interview with Stephen.]

Stephen: To me it’s my dream job. It’s got a bit of everything I want because I can do my own thing, I can go serve a customer, go back to what I’m doing coz I know it’s going to be waiting for me there anyway. And on a rainy day, there’s always stuff to sort out so on a rainy day it’s inside doing sorting.

[Back to the interview with Malcolm.]

Malcolm: I see a future for him with us and we’re glad to be part of helping Stephen find who he is and what he can do.

[Back to the interview with Jenny, intercut with shots of Stephen playing indoor netball.]

Jenny: Stephen – one of the things he was obviously keen on was netball and he talked a lot about going to No Exceptions Netball over at the Mount which is for people who have a disability on a Saturday morning. He was pretty good at playing netball. He mentioned playing with the parents and family members once and how he got the better of them a couple of times and when he got his place in central Tauranga, and we were looking at budget as well, every kind of penny counts when you move out and I said to him ‘have you ever thought about going to the local netball league. I’ve played there in the past and if I can play there, then you will be more than ok.’ So, I guess it was just giving Stephen the opportunity to see there was another local league that he could play.

[Shots of Stephen at work.]

Jenny: The biggest change is that he seems to feel in charge of his life. He’s got a life that he’s happy with now. He’s got some dreams and things he wants to have happening in the future. But it’s really neat to see that he’s just happy with what’s going on for him here and now.

Stephen had a clear vision of what his first flat would be like. To help him get started, Jenny organised a meeting with local property manager, Colin. He proved very helpful to Stephen, advising him on tenancy agreements and his rights and responsibilities. Colin kept in touch with Stephen, even though his rentals weren’t suitable for Stephen in the end.

When the right place was found, on Trade Me, Jenny put Stephen onto a local budgeting advice service so he was prepared for the rent, bills and other costs before moving in.

“My role as LAC was about connecting Stephen with the right people in the community that could help him enjoy his independent life away from home,” Jenny says.

Living with a flatmate was a big adjustment for Stephen and was not initially an easy transition. Soon after he started flatting, the landlord wanted to sell the property. Stephen was surprised when his flatmate asked him to move into another house. It was a great confidence booster.

Gradually the two flatmates got to know each other and organised shopping, meals and cleaning between them.

“We work in together as flatmates. We have our own routines. It’s definitely different from living at home. I feel more independent,” Stephen says.

Once the flat was established, Stephen resumed his search for ongoing work. He had lost confidence after losing a previous job and needed a hands-on role where the staff were supportive of his disability and recognised his strengths.

Stephen had met Malcolm at Tweed’s several times and asked him about a position. Although there weren’t any paid openings, Malcolm offered Stephen the opportunity to learn on-the-job.

“Our work has lots of variety and challenges and Stephen seems to thrive on those. We’re glad to be part of helping Stephen find out who he is and what he can do,” Malcolm says.

Stephen’s skills-base has grown during his time at Tweed’s. His customer service has improved and he is gaining knowledge about different house fittings. He sees it as his way back into the workforce.

“I look to Malcolm and the others for guidance. If there is something I’m unsure of, they will show me how to do it. I can show customers how things work now,” Stephen says.

His improved people skills have had a flow on effect in his social life. Since beginning work with his LAC, Stephen has transitioned from playing netball in a competition for people with disabilities, to playing in a mainstream team. Jenny introduced him to the Thursday night league, after hearing about his talents on the court.

She’s also informed Stephen, an enthusiastic cyclist, about cycling events in The Bay. He gets most places on two wheels but aims to get his drivers license to further his social life. His flatmate is helping with lessons.

Stephen says that his life has improved since meeting Jenny. He is happier, has more to do and has a good relationship with his Mum and Dad whom he visits regularly.

“Life for me now is definitely better. I’m not under my Mum and Dad’s feet all the time and I have always got Jenny who I can turn to if I get a bit stuck on something. She’s been quite a lifeline actually,” he says.

Jenny says that the change in Stephen is evident and that he is now looking forward to the future.

“The biggest change I’ve seen in Stephen is that he is in charge of his life. He makes the decisions about what he does. He got a life that he’s happy with now and he has dreams for the future,” she says.

Read more about the people who have started using the Ministry of Health’s New Model for Supporting Disabled People in the New Model People Stories section.