Moving into a flat and taking charge of household chores has helped Murray ‘come into his own’. 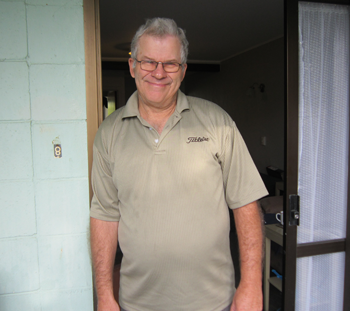 With CiCL, Murray gets to choose how his funding is used.

He left a residential facility in July 2013 and shifted into a one-bedroom flat using the Ministry of Health’s Choice in Community Living (CiCL) demonstration. Living alone had been a goal in his personal plan for a long time.

‘He wasn’t enjoying having staff around all the time and wanted to do more things by himself,’ says Kirsty, one of Murray’s support workers.

Now, with CiCL, Murray gets to choose how his funding is used.

He gets support from Kirsty and other IDEA Services workers. He is the ‘boss’ and gets the staff to call before they turn up in case he feels like sleeping in a bit later.

He is hoping to find someone who can assist him on Sundays – preferably a man who can take him to car races and work flexible hours.

His eldest sister Audrey says the family was initially worried about whether Murray would cope with living by himself and whether there would be enough support in place.

‘Our parents had set him up at [the residential facility] and we wondered whether Murray knew exactly what being independent meant.’

Family meetings were held to discuss how it would work, but the family still felt reluctant. ‘In the end we decided to give it a go. We know that people are still supporting him. He seems happy enough. It’s working at the moment so time will tell.’

Murray's week is packed with activities. On Mondays he attends a course at a training facility, which is assisting with his dream of getting his driver licence. On Tuesdays he goes to karaoke with a group from the training facility and on Wednesdays he distributes Meals on Wheels with support.

In summer, he helps a local lettuce grower to sell his produce at a farmers market every Thursday. Since his flat is close to the market, Murray also wanders over on Saturdays to help at the stall.

On Fridays he goes grocery shopping and runs errands with Kirsty. ‘We put things in a trolley, give them to the lady and she puts them in bags and gives them back to us,’ he says.

He also stops for lunch at his local café. ‘They are really friendly and always say hello to me.’

Murray reckons the best things about flatting are doing his own washing and ‘putting clothes on the line’, helping to cook meals and doing his own housework.

He has also enjoyed meeting new people since moving out of the residential facility. He has made friends with his neighbour, Thomas. ‘I visit him sometimes and he visits me. I shout (pay for) Thomas and he shouts me.’

He loves going to truck shows and field days and for a ride in a logging truck with long-time friend John. ‘I‘ve been to car races, speed boat races at the lake and I like fishing.’

Murray knows most of the local truck companies and the drivers always wave to him when he is out and about.

‘Murray’s come into his own since he’s moved into his flat,’ Kirsty says. ‘He doesn’t have to fit in with any routines and he can be so much more independent.’