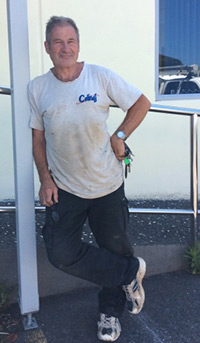 Kerikeri local, Keith Huggins has nothing but good things to say about his journey with the Green Prescription (GRx) programme. He embarked on his journey in July and now, 4 months later, he is a changed man.

When Keith began the programme he was suffering from stress, which had led to rapid weight loss and loss of strength. He also had a shoulder injury, arthritis in his knees and a history of years with depression. He met with Kerrin Taylor, his Healthy Lifestyle Advisor, to discuss ideas for an activity plan that would work for him.

He was keen to get started straight away and joined the Community Fitness gym. Now he is attending regularly and doing a range of exercises such as cycling, weights and the rowing machine. The rowing has helped his shoulder regain range of motion, which has allowed him to get back to work, doing more activity there as well.

As a result of regular exercise, Keith is now much more confident and his self-esteem is much higher. Describing his new routine, he says, ‘It makes you feel tall again.’ Keith goes on to explain how regular exercise has provided structure, which really helps alleviate the depression. This has in turn helped him to adopt other healthy routines. ‘It makes me feel comfortable with myself,’ he adds.

One of Keith’s other healthy routines is a change in eating habits. He was missing meals and was unmotivated to prepare food so opted for convenience choices when he did eat. He is now eating salads and high fibre foods, eating regular meals and also drinking much less alcohol. He has gained weight, now feeling much better at a healthy weight.

Keith’s biggest barrier to getting more active was a lack of motivation, which is a common effect of depression. ‘It was difficult to pull myself up mentally,’ he says. He has managed to overcome this, and really appreciates the coordinated approach with support. As well as GRx, this includes mental health services, Keith’s GP and the gym.

Keith is keen to support anyone with problems similar to his, and offers some advice – ‘do some goal setting and work out what areas in your life need sorting. Do what you can, don’t worry about what you can’t – keep it achievable. Deliberately work on improving self-esteem. Exercise can really help.’

This story was provided by Sport Northland.