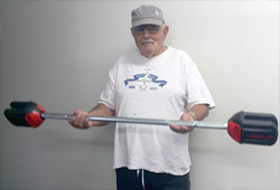 Richard Pocock grew up in Christchurch and had always dedicated his time to helping others.

He took on a career in surf lifesaving and this kept him extremely fit.

He moved to Auckland with his wife in 1981 where he worked as an engineer. He and his wife lived a happy life raising three children.

Unfortunately, Richard's wife passed away three years ago and things took a dramatic change. Richard fell into a depression and gained a lot of weight.

“I was too fat, I had to lose some weight” Richard says. The doctor agreed with Richard’s sentiments, and referred him to Green Prescription.

In late September 2016, Richard started his journey to regain his health. Richard started with a face-to-face consultation with his Green Prescription support person and together they sorted out a plan. Richard began gradually with swimming and walking and has worked his way into regular gym work at the Glenfield Leisure Centre.

The increase in activity is exactly what Richard needed. He has lost over 5 kilograms since starting with Green Prescription. He is fitter than he has been in years, and is back to enjoying his main passion, the water.

Richard has always had a good knowledge of activity and nutrition but had lost his way. “I just needed a push to get going”, says Richard, and he has achieved amazing results since.

Richard plans to continue with his swimming, walking and gym routine. He wants to carry on with losing weight and improving his fitness.  Congratulations Richard, we wish you all the best with your future endeavours.

This story was provided by Auckland’s Harbour Sport.