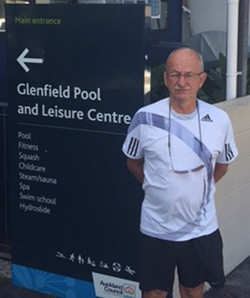 Bill Pittman was initially referred to the Green Prescription by his GP at Albany Basin Accident & Medical, with the aim of increasing his activity levels through swimming.

A former builder, and keen runner, Bill was always active, but had sustained an injury to his back. As a result he had lost core strength, and had been getting physio to improve his hip and core strength.

William had started swimming at Takapuna Pool & Leisure Centre twice a week for around 500 m, and felt it was going well, and he found himself enjoying this, but felt he needed something else in his routine.

Upon joining Green Prescription, Bill set some initial goals of strengthening his back and core, as well as keeping fit and mobile. Bill continued to swim but also introduced a Green Prescription Group Exercise Class at the Glenfield Leisure Centre, once a week.

In addition to the exercise routines, Bill has also been to a dietitian, and has worked on some strategies around his eating.

Initially Bill was 78 kg, and after 2 months on Green Prescription he has reduced his weight down to 72 kg. He feels like his progress has been great, and he is keen to continue with his newly established routine. Bill also intends to join the gym, and has even bought some dyna bands, so that he can do some exercises at home!

Bill said that ‘the Green Prescription gave me the initial spark I needed, and has piqued my interest in physical fitness again’.

Bill is a great example of someone that has benefitted from the initial motivation that the Green Prescription provides.

If you would like support with exercise and maintaining a healthy lifestyle, and would like to know more about the Green Prescription Programme, ask your GP or practice nurse.

This story was provided by Auckland’s Harbour Sport.