The biggest challenge of my life – Gordon Innes 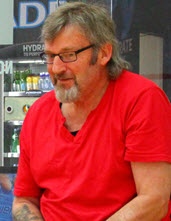 The 58-year-old butcher suffered a stroke which left him without movement on the right side of his body.

It was a massive blow for Innes, a very active Southlander who loves his fishing. ‘I used to work from 7am to 6pm and then come home and do firewood, or whatever. There was always something to be done,’ he said.

‘The stroke took away my right side. You see some people who aren’t as active and you wonder “why me”, but that’s just what happens. I’m getting my leg back, but it’s been a long, hard road.’

In November last year Gordon’s wife Theressa contacted Sport Southland’s Ann Robbie about the Green Prescription programme, which is designed to help people who want to be more active but aren’t sure how to go about it.

‘Theressa rang me and asked if there was anything we could do to help, because she’d seen other things we’d done for people. It was a big “yes” from me,’ Ann said. Ann suggested that Gordon give Cycling Southland’s Cyclofit a try.

Cyclofit riders ride mountain bikes, tricycles or specially adapted bikes around the flat area inside the SIT Zero Fees Velodrome. The indoor facility provides a safe and controlled environment for people of all ages and abilities to rediscover the joys of riding a bike. With no hills, no adverse weather and no traffic issues to worry about, the programme has proved popular.

‘It’s a big challenge – the biggest challenge of my life.’

Even negotiating the two sets of stairs to get into the Velodrome was difficult for Gordon to start with, but he laughs when he looks back now. ‘Just getting in here was a work out and a half,’ Gordon said.

‘When I first started I was doing three or four laps until I got a bit fitter. I’ve been up to 40 laps at once, which is 10 km, but I was finding that I was dragging my feet around at my afternoon physio session,’ Gordon said.

‘(Cycling Southland’s) Bruce Ross was brilliant, he chucked me on the yellow tricycle and sent me out for a couple of laps.’

Ann says Gordon’s commitment and hard work has been inspirational. His goal had been to walk unaided and that’s something he achieved recently, thanks in part to the work he has done through Green Prescription.

‘He’s always been pretty determined to do something. People have to be prepared to put the work in and, for people like Gordon, you don’t mind going the extra mile because you can see how hard they are trying.’

Gordon’s rehabilitation has included Cyclofit, walking and swimming and he’s also taken up the sport of boccia, a game of skill and strategy which is similar to lawn bowls and petanque. After initially struggling to cope with his change of circumstances, Gordon has set his mind to achieving as much as he can on his road to recovery.

Gordon went on to cycle the 3 km Surf to City along with Mike Hamill (another success story with cerebral palsy) and Tony McAra who made the TV1 news for GRx (Tony had also had a stroke).

When these three men cycled into the park to finish the event spectators were humbled by their ‘not giving up attitude.’