‘You just shouldn’t take the risk’ 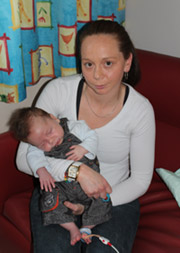 Although her son Nixson Harlick had his first immunisations on time at six weeks of age, he wasn’t old enough to have had his second 12-week immunisations when his father Jason became sick with a cold and cough which turned out to be whooping cough. The couple’s other two preschoolers had been fully immunised.

For Jenah watching her 11-week-old cough until he turned blue and struggled to breathe was terrifying. Despite being with him in hospital, there was little she or health professionals could do except hold an oxygen mask to his face and hope he would continue breathing.

When interviewed for this story, Nixson had been in hospital for seven days and there was little sign of him improving. When he finally breathes, he usually cries, setting off another coughing fit and so the cycle continues. ‘At the moment, I just don’t know when this is going to end. It is just the most frightening thing when he can’t breathe,’ Jenah said.

Whooping cough had exhausted the pair. On occasions Nixson had been violently coughing and rather than cry he was so exhausted he just fell fast asleep, in the middle of an attack. Jenah’s ability to sleep had meanwhile become more difficult as she was afraid to sleep having once awoken to find Nixson had gone blue.

‘I just feel so sorry for him. He’s only been in the world such a short time and it’s so nasty,’ Jenah said. ‘A friend rang me this afternoon and I told her off. She waited until her baby was 18 weeks old before his first immunisations. You just shouldn’t take that risk.’