Twin girls’ illness highlights the importance of immunising on time

Spending time in hospital with their baby girl battling whooping cough wasn’t how Ramona and Peter Muliaga envisaged their honeymoon. 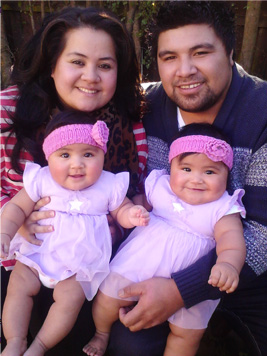 The couple were getting ready for their wedding day when Marliena-May, one of their twin girls, started to become unwell. They made it through the wedding but as the day progressed they became increasingly concerned about the eight-week old baby’s health.

By the next day they were so worried that they took Marliena-May to Christchurch Hospital, where she was diagnosed with whooping cough and admitted to a children’s ward.

Because she was so young she had only had one whooping cough vaccination (at six weeks old) and was struggling to fight the disease. It was to be four weeks before Marliena-May and Ramona could go home.

‘It certainly wasn’t the honeymoon I’d been expecting ‘ Ramona says. ‘I was really scared. Marliena was very little and very sick. She was attached to oxygen for a lot of the time.’

‘The doctors would give her oxygen to help her breathe again. It was so scary. It was really hard to watch and I couldn’t do anything.’

When the twins were three months old, Marliena-May was discharged from hospital and the family enjoyed a month of good health before Ayva-Rose started coughing. Ramona recognized the familiar sound of whooping cough and immediately took the baby to her GP.

Ramona says she doesn’t know how Avya-Rose got sick. ‘It was such a long time after Marliena that we think it must have been from someone else with whooping cough.’

Unlike Marliena-May, Ayva Rose had received two vaccinations when she became ill. This, combined with the antibiotics, seems to have made a big difference to the way Ayva-Rose could fight the illness compared with her sister, Ramona says.

‘The worst of it was over within about five days, she didn’t have to go to hospital and her coughing settled down quite quickly.’

At six months, the babies are now healthy and thriving. ‘I’m just so happy that they didn’t both get sick at the same time and that they have come through it OK,’ Ramona says.

If there is one message the newlyweds hope other parents take heed of is to: ‘Get your babies immunised and take them to the doctor quickly if you think they have whooping cough.’