When Jackie Broadbent found herself racing to hospital in an ambulance because her two-year-old child was fitting, she was frightened.

A geriatrician, Jackie is not prone to panic. She had kept five-year-old Dan and two-year-old Sophie home from daycare because Dan had diarrhoea and Sophie was a bit off colour. 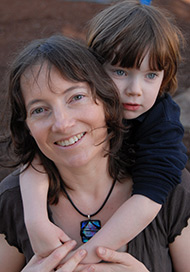 Suddenly, mid-afternoon, Sophie went rigid and blue in the face: ‘Initially I thought she was choking and then she started seizing.’

Within half an hour Jackie, Sophie and Dan were in an ambulance heading to the GP surgery, where Sophie was  put on a drip and sent by ambulance to Christchurch Hospital. She had two more seizures on the way and another five over the next few hours.

The seizures stopped once Sophie was given an intravenous infusion in the high dependency unit where she was monitored hourly over the following 24 hours.  Although she had started to improve by morning she was still confused and quiet. Then she developed diarrhoea. Soon after, Jackie did as well. Samples were taken and rotavirus was diagnosed.

‘One in 1000 children will have seizures from rotavirus, but it is certainly not a typical response,’ explains Jackie, adding she was hugely relieved to have a name for Sophie’s condition and to know it wasn’t life threatening.

Sophie spent two nights in hospital. Back at home she had diarrhoea for a couple more days and was off colour and wobbly on her feet.  Dehydration is a big concern with rotavirus: ‘The important thing is to get them to drink and keep drinking. It took Sophie a week to fully recover.’

Sophie’s experience of rotavirus was extreme and rare, but Jackie says, even at the lower end, it is unpleasant to deal with.

‘It is horrible watching your child suffering from rotavirus. It is also ghastly when you have young children at home with diarrhoea and vomiting and you’re also racing to the toilet yourself,’ she says.

And then there is the loss of income or use of sick days because the whole family is affected.

It is very hard to prevent the spread of something like rotavirus.

‘Children will suck or play with each other’s toys. Whether at daycare or visiting a friend’s house, it’s a common scenario and it’s just not possible to avoid exposing them to bugs.’

When she heard of a rotavirus vaccine after her third child was born, Jackie didn’t hesitate. Given orally, rather than by injection, it makes it easier for young children.

Jackie sees the importance of vaccination from another perspective as well. A couple of months after Sophie’s hospitalisation, her son Dan was diagnosed with a brain tumour and over the past two years has gone through surgery, radiotherapy, chemotherapy and a stem cell transplant. Because of his low immune system, Dan is highly susceptible to disease and illness.

‘This is a big problem for children with cancer or other chronic illnesses. I don’t think parents who are not getting their children immunised against these childhood diseases realise how much difference it can make.’

‘You think rare things can’t happen to your children, but they can. We are one of the first generations to be able to assume our kids will all live to adulthood. We have become complacent and don’t understand the severe consequences of some of these diseases.’