For two months, rotavirus was an ongoing nightmare for Jan Goddard’s family. A Waikato pharmacist and pharmacy manager, Jan returned to work part-time after seven months parental leave with baby daughter Abigail. The second day after Abigail started at daycare, Jan arrived to find eight of Abigail’s new playmates were home with a tummy bug. 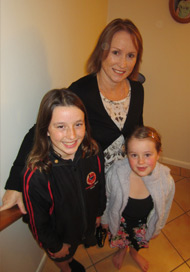 Five nights later Abigail vomited all over Jan and down the back of the couch. And so began the cycle, day and night, of vomiting, diarrhoea, breastfeeding and washing.

Between bouts Jan managed to keep breastfeeding Abigail while also giving her a fluid replacement solution and paracetamol.

‘I was changing clothing and bedding after every feed. I had to start putting cloth nappies over the bedding to cut down on the washing.’

Jan took Abigail to their doctor. While waiting for test results things continued to go downhill at home with six-year-old Molly waking the next morning saying her bed was wet. It was vomit. Now Molly was at home too.

By now it was confirmed Abigail had rotavirus, a virus that usually lasts two to 10 days. The doctor assured her Abigail should be okay if she stayed hydrated.

‘Perseverance was the key,’ says Jan, who was now in a routine of scrubbing and disinfecting every surface and toy in the house to prevent further spread of infection.

‘Rotavirus spreads like wild fire so we also had sterile hand gel everywhere so any unexpected visitors could keep their hands clean.’

After eight days, Abigail began to improve. She put on weight and within a few days she had returned to daycare and Jan felt life was back to normal. But she was being optimistic. About a month later Abigail had a touch of diarrhoea, then vomited. Rotavirus was back.

Initially Jan tried to continue working part time, sending Abigail to her parents, but then her parents got the virus, Abigail got worse, and Jan went down with it. She spent 24 hours in bed and had to rely on her sister to help care for the children.

Finally, 11 days after the second bout, Abigail started to improve again and this time the virus didn’t return.

Abigail is now six years old, but Jan remembers vividly the impact of rotavirus on her baby and family’s lives.

‘I still can’t forget the smell and sense of exhaustion and concern. It can be so devastating and there is such a fine line with health. If she hadn’t stayed hydrated, she could have very easily ended up in hospital.’