At 16 years of age, Leroy Beckett has learnt something that takes many more years for most people to discover. He knows he isn’t bullet proof.

Hi, I’m Leroy Beckett, I had chemotherapy for two years (ish), because of lymphoblastic lymphoma.

Measles for me just meant that I couldn’t go out and do anything during the epidemic, because my immunity was so low. Even though I’d been immunised, I wouldn’t have been able to fight measles if I had’ve got it. And half of all chemotherapy patients who do get measles die, so it’s a bit of a big deal.

I think it’s really important for people to get immunised, because it means people … if everyone had immunity, there wouldn’t be the epidemic, and people could just live their lives, people who are immune compromised. But because people aren’t immunised, it means there is that added risk. By not immunising, you’re putting not just yourself in danger, but everyone else who can’t be immunised, or who don’t have the immunity.

If you’re not immunised, you’re kind of riding off everyone else who is immunised. So it’s a bit like, ‘oh, yes, it’s good for them’, but you have to think about all the other people who don’t have the chance to be immunised, or can’t for medical reasons, or who it didn’t work for. So it’s very … it’s life threatening for a lot of people, can leave people who serious illnesses or disabilities. So you kind of have to think it’s for the greater good, almost.

In Easter 2009 Leroy almost died as a result of undiagnosed acute lymphoblastic lymphoma. He is now midway through three and a half years of cancer treatment, which has reduced his ability to fight off everyday illnesses to almost zero. More serious illnesses like measles are life-threatening for him.

Leroy’s mother Sue says that while she encourages her son to lead a normal life, the recent Auckland measles outbreak has been terrifying. ‘People just don’t take measles seriously or they would immunise against it. They don’t think it is as awful as it is and don’t understand what it can do to people with low immunity,’ she says.

‘Leroy is responsible about his health but most of the time he is just a normal 16-year-old kid who likes to do normal teenage things. It would be so much better if everyone in the population had been vaccinated and we didn’t have this to fear.’

To help protect himself from getting sick Leroy goes to the movies and shopping malls at times when there are few people there, avoids being near young children, uses hand sanitiser regularly and drives himself to school to avoid prolonged contact with others on the school bus. He also has the same food restrictions as pregnant women and has intravenous antibiotics every month to guard against pneumocystis pneumonia – caused by a common yeast organism that Leroy has been told could be more harmful to him than lymphoma. 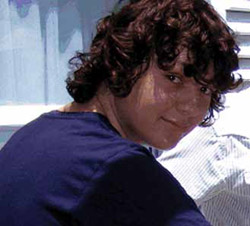 ‘You could get really paranoid about an illness like measles getting you because it could happen anytime but I don’t want to live my life like that,’ Leroy says.

Aside from one week, Leroy has continued going to school throughout the measles outbreak but the school nurse has been asked to alert the family immediately if a case is identified at his school.

‘I have checked that all my friends have been vaccinated and all of our family has been so I have a bit of a buffer around me. At any family dos, it’s the rule that there are no kids that have been sick and I’m lucky that there is just Tyson [his 21-year-old sister] and me in the family,’ he says.

‘I definitely want to encourage people that it is a good idea to get their kids immunised but I’m rather biased because I don’t want to die. I don’t see any negatives to it as far as pros versus cons: there is no question for me.’

Sue says the need for people to immunise their two-year-olds could seem very removed from protecting young people like Leroy but it is a reality. ‘If people haven’t had their children immunised or been immunised themselves they can do it at anytime to help look after people who can’t be [immunised],’ she says.

After writing this story: One of Leroy’s classmates became sick with measles and Leroy was confined to home, missing the last few weeks of school before his end-of-year exams. He did however, much to his delight, manage to attend the first All Blacks vs France World Cup match wearing a mask.