After seeing the effect of chickenpox on their immune-compromised son, James and Karen Alden have been terrified by the recent Auckland measles outbreak. 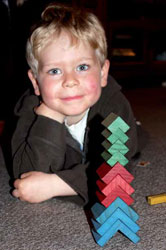 Cooper (now three-and-a-half years old) was diagnosed with acute lymphoblastic leukaemia when he was 20 months old. He started chemotherapy on the day he was diagnosed and will finish just before his fifth birthday.

At the moment his treatment includes daily chemotherapy tablets, intravenous chemotherapy and steroid courses monthly, intrathecal chemotherapy into his spinal fluid every three months and a trip to hospital for intravenous antibiotics whenever he has a fever and very low neutrophils (white cells that fight bacterial infections).

While Cooper’s immunisations were up to date before he became sick, his immune system now doesn’t recognise that he has been vaccinated.

‘The chemotherapy that is killing off the cancer cells in his bone marrow has also wiped out his immune system’s memory and he has about a quarter of the immunity of a healthy child,’ Karen says.

‘What’s left is enough to deal with coughs, colds and run-of-the-mill bugs but unfortunately he came across someone with chickenpox and his system couldn’t cope with it on its own,’ she says.

For six months, Karen says Cooper would have a new bout of chickenpox every 28 days. ‘He would have a rash and runny nose for about five days. His system would forget he had had it when his steroids started again and it would come back.’

While he was given immunoglobulin to help fight the illness and it eventually passed, Karen was told measles is much harder to treat. ‘The only thing we can do to protect him is to keep him away from children that haven’t been immunised.’

At three-and-a-half Cooper is ready to start Kindy but won’t be able to go unless all of the children in his session have been immunised. Until now he has played mainly with his cousins, his six-year-old sister Mikayla and 16-month-old baby sister Hollie who are up to date with their immunisations, including chickenpox.

‘Any play dates are well checked and we keep him away from crowded places like shopping malls. Sadly it’s a case of lots and lots of isolation,’ Karen says.

‘People take it seriously if they know us but for a lot of people it seems ignorance [about the impact of measles on immune-compromised children] is bliss,’ she says.

After this story was written, it was thought Cooper had come in contact with measles and he was treated with immunoglobulin. Karen Alden says, ‘It made James and I feel physically sick. The worry is hard to describe but you cannot get used to the fear of losing your child.

‘It [his possible connection with measles] has shown us how hard it is to keep him safe from this threat. No child wears a note to say they are vaccinated, and measles can live on a surface for two hours.’

The Aldens were also worried that Cooper’s isolation was beginning to affect his social development and he was reflecting their worries about young children he didn’t know.