Measles keeps Kelcey away from school

Having just missed a year of school through illness and chemotherapy, 10-year-old Kelcey Roberts was unluckily attending Auckland’s Oratia School when the 2011 measles outbreak started there. 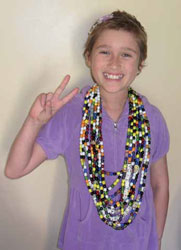 ‘We couldn’t believe our bad luck,’ Kelcey’s mother Tracey Roberts says. ‘Kelvin and I suddenly discovered that there were a large number of unimmunised children at our children’s school. That meant the odds were increased that she could contract measles – a disease that could kill her.’

Kelcey was diagnosed with acute lymphoblastic leukaemia in December 2009. The treatment for her cancer, which reduced her immunity to very low levels, meant she was unable to attend school in 2010 except for very brief periods.

She had also had time off school in early 2011 and was just settling in again in term 2 when the first case of measles at Oratia was confirmed. The Roberts family were contacted by the school and Kelcey was immediately removed.

Tracey says her daughter finds it hard to fathom why other children aren’t protected against a disease that could be so dangerous for people like her. ‘Kelcey understands why she can’t go to school because of a low blood count or when she is unwell, but she was feeling great and she couldn’t go because so many pupils at the school hadn’t been immunised.’

Kelcey was away from school for five weeks during the measles outbreak and when she went back she was restricted to only going to her class because of the increased risk of mixing with unimmunised children in other classes.

‘Richard Hoskins [the local Medical Officer of Health] called us every Wednesday to give us an update on the measles outbreak. That way we knew when it was safer for Kelcey to go back to school,’ Tracey says.

‘Every time I take Kelcey out of the house, it’s a risk – we cannot go the mall, McDonalds, the movies or places with lots of people. Measles can live on surfaces for two hours. There was a case in Auckland of a child, with measles who went to the movies, and there was a risk they could have spread it to other children.’

Tracey says, even though the rest of their school community knows about Kelcey, she doesn’t think they understand how dangerous measles would be for her. ‘Because she looks quite well, people might think she is out of danger but if Kelcey got measles she could die.

‘When I had Kelcey immunised as a preschooler, I did it to protect her and for the greater good. We need the majority of our population immunised to make it safer and healthier for everyone. I thought about the elderly and newborn babies but it wasn’t on my radar to think about kids with cancer.

‘I know that people who choose not to immunise their children have their reasons and those reasons centre around doing the best thing for their child. I get that. The problem is that there are people in our community who do not have the luxury to choose whether to immunise or not. Kelcey cannot be immunised for anything because of her treatment, yet prior to her diagnosis she was fully immunised.’

Kelcey is one of two children in the Roberts family. Her Mum, Dad and 7-year-old brother Maclain have all been immunised. Kelcey’s immunisations no longer work because of the impact of chemotherapy on her immune system.

Although Kelcey hasn’t been able to go to school for much of this year she has taken part in Camp Quality for kids living with cancer and loves emailing and skyping her friends.