Ally Edwards-Lasenby says driving across Hamilton to Waikato Hospital, with her son seriously ill with measles, was the most frightening car trip of her life. 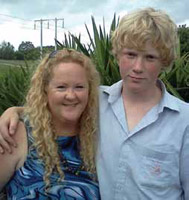 ‘We’d been at the doctor’s surgery and they were so concerned about the way Cameron was looking they told me to drive him to hospital because it would be quicker than getting an ambulance,’ she says.

‘Cam was very, very sick. I didn’t realise you could even get that sick from measles. He had almost every possible symptom that could be related to it – runny nose, cough, temperature, white spots inside the mouth, conjunctivitis and a head-to-toe rash.’

In the four days since he had become unwell, Cameron (13 ½) had developed a full body rash, had stopped eating and drinking and was so unwell when he got to Waikato Hospital that medical staff struggled to give him intravenous fluids as his veins were collapsing.

‘I saw my big 13 ½ year old, who’s taller than me, slowly disintegrating before my eyes and wasn’t able to do anything. I thought “this happens to other people not my baby”. I just didn’t realise that measles could do that,’ Ally says.

Cameron was kept in isolation at the hospital to protect other children and after three days of ‘fantastic nursing care’ was able to go home. It was another four or five days before he started eating again and, despite being on antibiotics, then developed a cough and chest infection.

A month after he became sick, Cameron was able to return to school but struggled for some time with full days. When this story was written it had been three months since Cameron had become unwell and he had still not regained the seven kilos he had lost while he was ill. ‘It is really fortunate that he was so strong and healthy before he got sick,’ Ally says.

Ally had decided not to have Cameron immunised against measles, mumps and rubella when he was a baby because she thought the vaccination could increase the chance of him having autism.

‘I made an informed decision based on the information I had at the time but the research has been proven to be invalid. I should have gone back to check it but I never followed up,’ she says.

Because of Cameron and other Te Awamutu College students getting measles in 2011, she says her GP contacted all of the parents in his practice that had made the same decision as her and many of them had decided to immunise their children.

‘By sharing our experience with people I hope I can create an awareness of the importance of immunisation. I wouldn’t hesitate given what we have been through.’

Cameron’s illness prompted Ally to quickly have her second son Paul (14 ½) vaccinated with his second MMR immunisation. A niece was also brought up to date with her immunisations, along with some of the boys’ friends.

‘Because I am an early childhood teacher I had to be tested to see if I was immune or I could have placed other families in jeopardy. Luckily I was immune but Cameron’s Dad couldn’t visit him in hospital because we didn’t know about his immunity,’ Ally says.

‘We also contacted everyone Cam had been in touch with and as far as we know he didn’t pass it on.’ Although Cameron is now immune to measles, he is still having all of his vaccinations, including MMR to protect him from mumps and rubella. ‘After all this, we don’t want him having those too,’ Ally says.

This case study was originally published in Immunisation: Making a choice for your children.