Despite her son being very unwell and spending time in hospital, Leah Hughes is grateful that her family escaped as well as they did when measles came into their home. 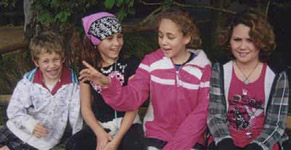 Leah and Andrew Hughes’ fourth child, Cameron (9), was one of the first children to get measles at Oratia School during the outbreak there in 2011. While it was worrying enough for him to have the illness, the family was very concerned for his 15-year-old sister Emma who was on maintenance treatment for Acute Lymphoblastic Leukaemia. Children with low immunity, in this case from having chemotherapy, have a much higher chance of serious complications from measles including a 50 percent risk of dying from it.

‘We first started to worry about how sick Cameron was getting on the Friday. We took him to the doctor and they said it was probably something viral,’ Leah says.

On Monday, Cameron woke with a rash covering him from head to toe and the Hughes’ GP confirmed he had measles. As a result, the couple had to take Emma to Starship Hospital for immunoglobulin to give her some protection against the illness.

They also told Oratia School that Cameron had measles and were asked to keep their 11-year-old daughter Tayla at home because she hadn’t completed her measles, mumps and rubella (MMR) vaccinations.

Cameron’s condition continued to deteriorate and Leah was struggling to keep his temperature under 40˚C. ‘He was really lethargic and grizzled a lot and his temperature was just so high.’

After a night of high fevers and vomiting, Leah took Cameron to Starship Hospital on Tuesday morning, where he stayed for the day while he was given fluids.

‘I knew how quickly children can get dehydrated because of looking after Emma through her chemotherapy treatment. I slept in his room on the Monday night and was up all night with him.’

On Thursday, six days after he got sick, Cameron began to feel a little better but it was another week before he could return to school. Tayla was also away from school for a fortnight while she waited for her second MMR vaccination to take effect.

‘I really regret not getting all their vaccinations done. Cameron was born in Australia and I was going to do it when we got back to New Zealand. Emma and Jade had all theirs but we needed to do it for the other two,’ Leah says.

She said she didn’t get the children vaccinated in Australia because the system was different and she wasn’t as sure about the vaccinations her children would receive.

‘I regret not doing it. I do. Unfortunately, it was the choice I made at the time. We’re booking Cameron in to have all of his shots now. He could have had measles a lot worse with other side effects and Emma could have been even sicker.’

Leah says she heard of several people who were upset that they had had to take time off work because their unimmunised children were not allowed to attend school during the outbreak: ‘They really are the lucky ones. If their kids had got measles they would have been off for longer and had a sick child. I think immunisation is the only way to go. People have a right to make choices but with my daughter being sick and knowing what it could do to her, I think it’s really important.’

This case study was originally published in Immunisation: Making a choice for your children.