This section includes stories from parents who chose to delay or not get their children vaccinated against measles because of concerns about the measles, mumps and rubella (MMR) vaccine. Many years later, during the 2011 outbreak, their children became very sick with measles.

These families and a university student describe what having measles is like, and medical officers of health give their perspective.

Despite her son being very unwell and spending time in hospital, Leah Hughes is grateful that her family escaped as well as they did when measles came into their home. Read more

‘We’re booking Cameron in to have all of his shots now. He could have had measles a lot worse with other side effects and Emma could have been even sicker.’

In the four days since getting measles, Cameron Edwards-Lasenby had developed a full body rash, had stopped eating and drinking and was so unwell when he got to Waikato Hospital that medical staff struggled to give him intravenous fluids as his veins were collapsing. Read more

‘I saw my big 13 ½ year old, who’s taller than me, slowly disintegrating before my eyes and wasn’t able to do anything. I thought “this happens to other people not my baby”. I just didn’t realise that measles could do that.’ 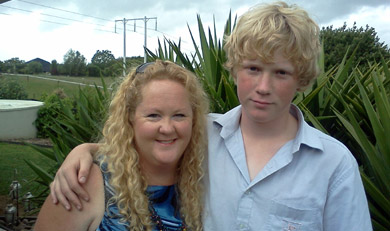 Nineteen-year-old Felicity Lyme caught measles from her Auckland-based brother Jacob when he visited his family in Wellington during one of the Auckland measles outbreaks in 2011. She says having measles was like having food poisoning and every other illness she had experienced rolled into one. Read more

‘… it is actually just like flu on crack. It’s just awful. It’s the most awful thing you can imagine.’

And then, when measles develops, you get terribly sick, you get awful, awful temperatures, and everything hurts and you can’t breathe. You get spots, you get rashes. I hallucinated, I was delirious … it is actually just like flu on crack. It’s just awful. It’s the most awful thing you can imagine. Especially when you don’t think that measles is bad.

And it develops, and you can’t do anything for yourself. You lose the ability to be a 19-year-old who does things for herself, who can go to the bathroom by herself, and drink water and do all that. Measles takes away all those aspects of everyday life that you think that you’d have. You don’t know who you are … it’s just this completely awful disease that people don’t think about.

When Paula Sullivan’s son Tom was a baby, she and the people she socialised with didn’t place a high value on immunisation. Sixteen years later in 2009, Tom, a top athlete, caught pandemic H1N1 influenza and then measles during an outbreak among his classmates at Christchurch Boys’ High School. Read more

Get immunised and eliminate measles

Auckland Medical Officer of Health Richard Hoskins spent most of 2011 trying to stamp out measles from his community, after two separate outbreaks made more than 595 people ill in Auckland and many other parts of New Zealand. Read more

‘The best thing we can do is to eliminate measles from New Zealand and the globe through immunisation, just as we did with smallpox.’

During the measles outbreak at Christchurch Boys’ High School in 2009, a number of distraught parents called Canterbury Medical Officer of Health Dr Ramon Pink asking why their unimmunised children had been prevented from attending school. Read more