This publication and accompanying tables presents data about suicide deaths and intentional self-harm hospitalisations for the year 2013 and highlights notable trends over time. The publication includes numbers and rates by common demographic breakdowns, such as age, sex, ethnicity, district health board (DHB) of residence and neighbourhood deprivation. The online tables that accompany this report provide the underlying data for graphs presented in the report as well as time-series data. An overview of key findings can be found below. 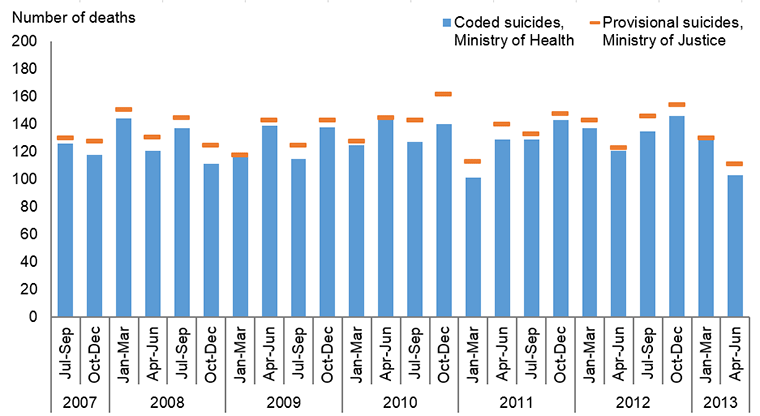 Information about suicide was audited in 2015

In 2015, the Office of the Auditor General (OAG) undertook an audit of the ways in which information about suicide is collected, analysed and used. Among the range of information used to inform the audit, Suicide Facts publications were reviewed. In general, the OAG has commented positively on the ways in which the Ministry of Health presents suicide data, but has made some suggestions to improve the way data is presented and about how information can be released in a more timely and accessible format.  Discussions are already underway between the Ministry of Health and Coronial Services of New Zealand, Ministry of Justice, to consider how suicide data can be reported more consistently. While some minor changes have been in made to the 2013 publication, further consideration will be given to suggestions from the audit for future publications in the Suicide Facts series.