The tables include information on mental health and addiction care (services) provided by secondary organisations funded by the Ministry of Health. Specifically, these tables cover: demographic and geographic information, client referral pathways, the types of services provided, the outcome of the services and legal status and diagnosis information.

The Ministry of Health, DHBs and NGOs are actively engaged in reviewing and improving the quality of PRIMHD data, but because there are some known issues yet to be addressed, numbers should be interpreted and reused with due consideration and care. Although it is not practical to record all known data quality issues, the most important considerations have been detailed below. If you need further details please contact: [email protected]

Some organisations had breaks in reporting and/or incomplete data in PRIMHD in the 2016/17 year. A few NGOs started and/or stopped reporting during 2016/17 so not all organisations have data for the whole time period. It is known that Waitematā District Health Board's PRIMHD data is under-reported for the 2016/17 year, so figures may be low in these data tables. For this reason please use Waitematā's data with caution.

To assist with activity (a synonym for services and care) coding in particular, the Ministry of Health has published ‘Guide to PRIMHD Activity Collection and Use’. We suggest you consult this guide to aid interpretation. A high level description of each of the activity types can also be found within the PRIMHD Codeset. The Guide for Use and the PRIMHD Codeset can be found in the following locations:

In 2008, DHBs began reporting to PRIMHD. In addition, from this date an increasing number of NGOs began reporting to the PRIMHD database. Shifts or patterns in the data after 2008 may reflect the gradual adaptation of non-governmental organisations into the PRIMHD collection in addition to, or instead of, any trend in mental health and addiction service use or outcomes. This point is illustrated by the artificial trend within the chart below in which the crude rate of clients seen by NGOs in 2016/17 was eight times that reported in 2008/09. Although NGO data is still incomplete, the Ministry of Health considers it complete enough for comparison across time from 1 July 2012 onwards. 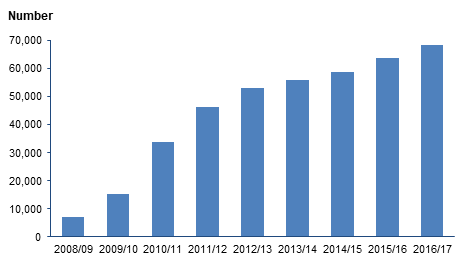 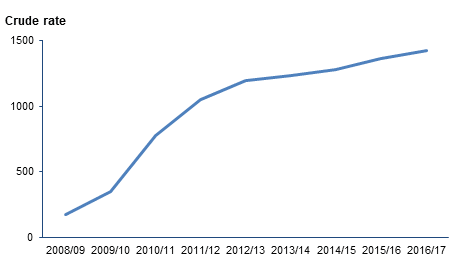 For several reasons the numbers in these tables are not directly comparable with the numbers in the Office of the Director of Mental Health (ODMH) Annual Reports, amongst other reports. The ODMH reports are published for a different purpose and use a slightly different method to identify the report subject matter. Further to this the OMDH reports are for a different time period and occasionally include manual data submitted by DHBs.

The Ministry of Health is actively engaged in reviewing and improving the data quality of PRIMHD. PRIMHD is a living data collection, which continues to be revised and updated as data reporting processes are improved. For this reason, previously published data may be liable to amendments. Caveats under each table should be taken into consideration before any comparison is made. The data presented in this edition primarily pertains to information on mental health and addiction care (services) provided in the 2016/17 financial year. Data from 2008/09 to 2015/16 has been re-extracted using the same methods and criteria to provide an up-to-date time-series view.

In particular, there was notable change made to the coding of team types as part of the HISO review of the PRIMHD Codeset. Team type data, extracted before 1 July 2014, should not be compared with the data within these tables.

As noted above, data is not complete in PRIMHD for all organisations for the 2016/17 year so care needs to be taken when using this data.

Of the 177,322 clients seen in 2016/17, the majority (153,958 or 87%) were seen face-to-face. The remaining 13% received services that involved care co-ordination contacts, contact with family/whānau, written correspondence, telephone calls and text messages, social media contacts/e-therapy.

The most common type of activity (or service) provided by DHBs in 2016/17 was ‘individual treatment attendances: family not present’. This activity type accounted for 43% of all DHB services provided. In contrast, the most common type of activity provided by NGOs in 2016/17 was ‘community support contacts’, which accounted for 27% of all NGO services provided.

As at 30 June 2017, there were 34,088 long term clients that were seen by mental health and addiction services for one year or more. Out of these clients, 21,650 were seen for two years or more.

In 2016/17, 960 clients were secluded for a total of 2,513 seclusion events. Seclusion is the placing of a client at any time, and for any duration, alone in a room or area from which they cannot exit.