This pages summaries the regulatory changes that took effect from 14 March 2018 and links to relevant documents.

The introduction of Tobacco Standardised Packaging is part of the Government’s comprehensive tobacco control programme.

What is in the regulations?

New pictures and health warnings will be enlarged to cover at least 75% of the front of tobacco packs, and all tobacco company marketing imagery will be removed.

Tobacco manufacturers will be allowed to print a brand name and variant on their tobacco products, but the regulations standardise how these look, including where they must be on the pack, what type face and font size and colour must be used.

Cigarettes will only be sold in packs of either 20 or 25 sticks, in standard cardboard packs and loose tobacco in pouches of 30 or 50 grams in standard rectangular soft plastic pouches.

The regime is similar to that in place in Australia.

View the regulations on the New Zealand Legislation website: 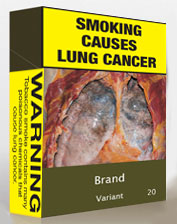 A new set of 14 health warning messages and images have been prepared and will feature on the new tobacco packs. Seven of these images will rotated each year:

The timeline to standardised packaging

It follows a decision in April 2012 by the Government to agree in principle to introduce a plain packaging regime in alignment with Australia pending the outcome of a public consultation process (published online: 23 July 2012). The public consultation closed on 5 October 2012 and Cabinet considered a report on the consultation on 18 February 2013. The Government decided to proceed with legislation (see statement on Beehive website). The resultant bill was lodged in December 2013 (see statement on Beehive website).

Information that is not related to plain packaging has been removed from these documents.

Some information has been withheld under Official Information Act provisions. Where this has occurred it is noted in the papers next to the redaction.