With a population of just over 100,000 in a relatively isolated region, Taranaki District Health Board has carefully considered how best to support aged care. This includes partnerships with aged residential care facilities and the local training institutes.

[The video starts with a shot of Mt Taranaki, then cuts to interviews with patients and staff. The interviews are intercut with shots of the patients doing rehab, being helped by staff and having afternoon tea, and also of Tainui Village itself.]

Female patient: Oh, well, I was helpless, you know? I couldn’t move, and gradually I’ve got to move and walk.

Male patient: So, I’ve been in base hospital for a fortnight and I’ve come to Tainui for my rehabilitation and to get my leg going again, which was– I had a broken femur. And now I’ve got to get it working again. All the joint, I find, or the knee, doesn’t seem to want to function.

Gail Geange, Associate Director of Nursing Taranaki DHB: We had established a role, the nurse consultant in aged care, within the directorate, so that that person could go out and support the nurses in the aged-care sector. We were aware that they didn’t appear to have a lot of support, and we felt that DHB could provide some of that support.

The reason we introduced the EICATT, or the intermediary programme, into the aged-care sector was because we noticed that people, especially the elderly who stay in hospital for any length of time, becomes deskilled. And therefore, we had people who were ready to be discharged, but not ready to go home. And so they needed a place to go that would bring their skills back up to independent living and could be discharged back into their own home.

Male patient: I’m able to do a lot more things for myself– very carefully, but it’s been very good.

Yesterday, I managed to do 15 metres on my walker, where previously to that, if I did two or three metres, that was a real effort. But each day I’m getting stronger and the staff are marvelous in the way they’re helping me. Like, at this point in time, if I went home, I know for sure I’d fall over. Or there’s things that, if they were difficult, instead of being encouraged and told to get going and get it done, you possibly wouldn't do, because you’d put it in the too hard basket.

I feel I’m on the way to recovery, yes.

Martin Hook, CEO Tainui Village Resthome & Hospital: Here at Tainui, we’ve had the enhanced care programme, which has allowed us to develop a much stronger relationship with the DHB, because we’re understanding what they need and what we need. And it’s good for the staff and the facility and the resident.

Brigid Bright, Nurse Co-ordinator: The opportunity of having the enhanced ICAT team at Tainui has given the staff a really good opportunity to learn new skills. It’s also had a flow-on effect to the other staff to see what they do. The other staff teach themselves and amongst themselves. They’ve assisted the residents in the fact that they now stand back and get residents to help more, because the enhanced programme with being rehabilitation means they have to help themselves. They want to succeed, so we’re there just to assist.

The EICATT includes a variety of clinical staff, from geriatricians through to specialist nurses, physiotherapists, occupational therapists and social workers. The team meets weekly to discuss each client, that client’s progress and their future needs.

The EICATT programme is designed for older people who would normally spend a number of weeks in hospital undergoing rehabilitation but who do not need the specialist medical care provided in a hospital. As clinical nurse specialist Bronwen Pepperell says, ‘They really just need intensive rehabilitation, which they can get at a facility like Tainui Village.’

The TDHB currently funds up to four Tainui Village residents at a time to participate in the six-week programme. Most are aged 65 years and over.

Tainui Village clinical coordinator Brigid Bright says, ‘It really is working well. It’s helping people get home quicker. It’s getting people out of hospital … and giving them a little extra push and the incentive to get home.’

Bronwen Pepperell says that patients are initially a little hesitant about going to a rest home for rehabilitation. However, the participants in the EICATT programme really benefit from it and enjoy the relationships they make during their time on the programme.

An individualised rehabilitation plan is prepared for each patient when they begin the programme. The plan focuses on creating a home-like environment. ‘Staff will often change the layout of the furniture in the patient’s room in order to replicate the patient’s home setting. The rehab programme also begins each day with “Breakfast Club”, where residents make their own breakfasts before starting the day – just as they would at home,’ Bronwen explains.

The programme’s activities vary, but sessions usually take place around three times a day. ‘The therapy is quite intensive – and we tell them from the start that it’s not going to be a holiday,’ Bronwen says.

Most people spend up to six weeks on the programme. ‘There are criteria that the people who are referred have to meet, and the programme doesn’t suit everyone. They need to have rehab potential and want to go home,’ Bronwen says.

Despite Bronwen’s warning, success rates have been impressive. From a sample of 60 people who had been through the programme by late 2012, only three had not yet returned home. The average length of stay had been three weeks.

Brigid Bright says that the programme has also been welcomed by Tainui Village staff. They enjoy the variety of the activities and the skills that they have acquired through the programme. ‘Staff are picking up on EICAT skills. They are not always automatically doing so much for the residents. Instead, they’re encouraging the residents to do more for themselves,’ Brigid says.

Brigid says that the integrated approach developed with the TDHB has other benefits too. The various health professionals involved in caring for Taranaki’s older people are now much better placed to work together.

As Brigid says, ‘It’s been really important having someone at the DHB who we can talk to and who understands what we’re talking about.’

By shifting the focus of nursing education at Western Institute of Technology in Taranaki (WITT), graduates will be much better prepared for aged care settings, Head of School Diana Fergusson says.

Diana began her nursing career in the 1980s at Taranaki Base Hospital. More recently, she worked with other Taranaki health care leaders to re-form WITT’s nursing curriculum into a ‘modern apprenticeship’ learning style.

The largely theory-based first year has gone. Now students are straight into hospital placements. Historically, aged care was commonly a first-year placement. It now takes place in the final year of study.

Under the new programme, students are placed in an older person’s care setting, such as dementia, rehabilitation or a private rest home hospital, while studying population health and chronic disease in their third year.

‘We reflected on the complexity of these older clients and the fact that a lot of them were now being cared for in the community. It makes sense to study your most complex patients in your third year, when you’ve got your basics from the first two years,’ Diana says.

Also, graduating nurses who choose to work in aged care can find themselves working in isolation, particularly in a rest home environment. ‘In a hospital, you might be working on a busy ward, but you’ve got a tonne of health care professionals around you to support you,’ Diana says. ‘We want our graduates to have a really good learning experience in aged care and see it as a good career opportunity.’

Theory was previously treated separately from practical placements. In the new curriculum, it is integrated into the course workload with a ‘knowledge for practice’ approach. For example, nursing students no longer do a pure science course. They learn the science that is required for practice as they go. ‘There’s a focus on “learning to learn”, so the trainee nurses know how to research clinical practice on the job,’ Diana says.

Diana says that feedback from students has been very positive. ‘They love the integrated nature of the course. The practice focus also keeps them motivated.’

TDHB aged-care nurse consultant Glenda Butturini believes that the new curriculum focus will bring positive changes to aged-care nursing. ‘We’re hoping it means that the students will recognise the complexities and have a good experience – helping to encourage the idea of aged care being a good career option.’

Supportive approach to training in Taranaki

Bronwen Pepperell is a clinical nurse specialist for Taranaki District Health Board (TDHB). She instigated a training programme to strengthen ties between the aged residential care (ARC) sector and TDHB.

Bronwen started by asking ARC facilities what they wanted from training courses. Then she worked with Dr Michal Boyd, a gerontology nurse practitioner at Waitemata District Health Board and senior lecturer in nursing at The University of Auckland, to develop a programme of targeted training for registered nurses. The training focuses on clinical assessment specific to ARC nursing.

The training programme includes six intensive study days in aged care. It covers topics such as: 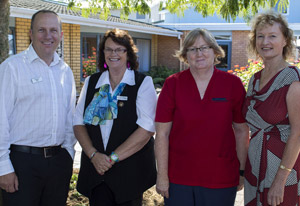 ‘These are all things that would make a difference and improve the outcomes for residents,’ Bronwen explains. ‘Aged care is not the same as hospital care, where you just call on a house surgeon for support. Nurses need to be able to carry out a range of functions and assessments.’

The programme has been well received by the ARC sector. Brigid Bright, the clinical coordinator for Tainui Village rest home in New Plymouth, says that the training programme is ‘hugely valuable.’ ‘Particularly, having access to gerontology expertise, which is not usually possible in a smaller, more isolated region.’

TDHB also actively encourages ARC nurses to keep up-to-date and provides free access to Professional Development and Recognition Programmes through an agreement between itself and individual rest homes.

There are many benefits from this approach. As Bronwen Pepperell says, ‘From the facility’s point of view, it means that the nursing staff have proven competence. And for the nurses themselves, it means that they don’t need to be audited by Nursing Council as they would otherwise be.’