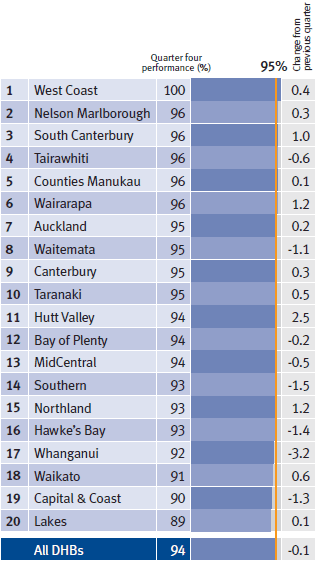 The new revised target definition for 2015/16 includes elective and arranged in-patient surgical discharges, regardless of whether they are discharged from a surgical or non-surgical specialty (excluding maternity). 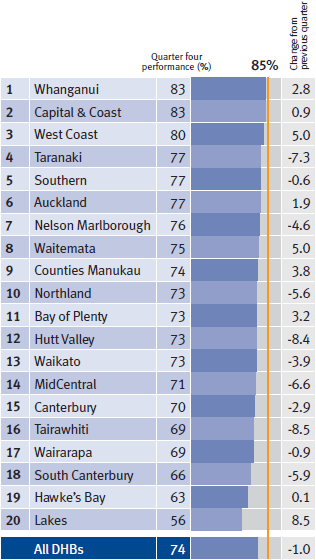 The target: The target is 85% of patients receive their first cancer treatment (or other management) within 62 days of being referred with a high suspicion of cancer and a need to be seen within 2 weeks by July 2016, increasing to 90% by June 2017. Results cover those patients who received their first cancer treatment between 1 January and 30 June 2016. Find out more about this target.

Results summary: National achievement of the faster cancer treatment (FCT) target is 73.9% this quarter. Data is based on 6 months rolling data and includes patients who received their first cancer treatment between 1 January and 30 June 2016. While this is a decrease of 1.0% from last quarter, it is an increase of 6.3% compared to the same period last year. No DHBs have yet met the 85% target. 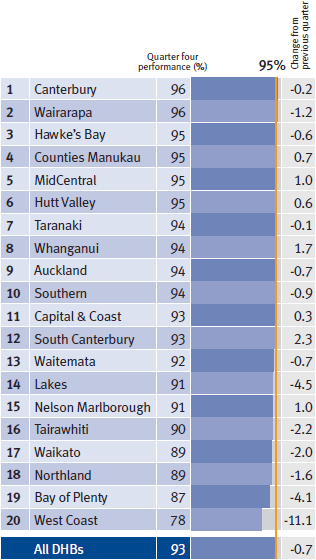 The target: The national immunisation target is 95% of 8-month-olds have their primary course of immunisation at 6 weeks, 3 months and 5 months on time. This quarterly progress result includes children who turned 8-months between April and June 2016 and who were fully immunised at that stage. Find out more about this target. 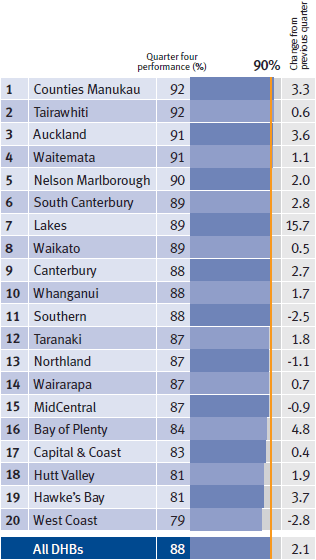 Results summary: The national better help for smokers to quit primary care target result was 88.1%, a 2.1% improvement on the quarter three result.

The hospital target is now only reported on this website along with the maternity results in the source data and individual target graphs for quarter four. 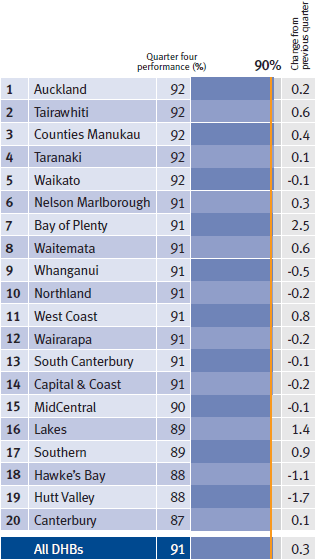 Results summary: The more heart and diabetes checks health target goal of 90% was met again in the final quarter of this health target with a result of 90.5% (a notable increase from 46% when the target began in January 2012).

This is an increase of 0.2% when compared with quarter three, and 1.5% higher compared to the same period last year. 14 DHBs have maintained or exceeded target coverage of 90%. All of the remaining DHBs were within 5% of reaching the target.

While this is the last quarter that cardiovascular risk assessment will be reported as a health target, there will be ongoing monitoring as part of the transition to a DHB performance indicator. The Ministry will continue to encourage DHBs to regard this work as a priority for their population, and will work with the remaining DHBs to reach the target over the coming year.