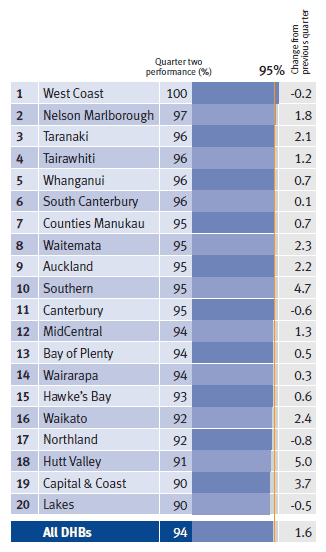 Results summary: The Shorter stays in emergency department health target result was 94.0%. This is 1.6% higher than quarter one’s result, but 0.3% lower than the result for the same quarter last year. Eleven DHBs met the target. 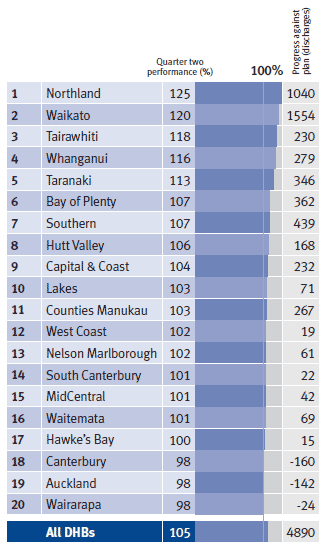 Results summary: The national Improved access to elective surgery target has been achieved with 98,870 elective surgical discharges provided, against a year-to-date target of 93,980. This is 4890 (5.2%) more than planned. Seventeen DHBs achieved the target and eight were 5% or more ahead of plan. The new revised target definition includes elective and arranged in-patient surgical discharges, regardless of whether they are discharged from a surgical or non-surgical specialty (excluding maternity). 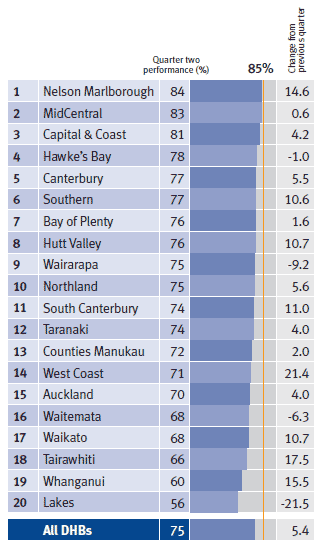 The target: The target is 85% of patients receive their first cancer treatment (or other management) within 62 days of being referred with a high suspicion of cancer and a need to be seen within 2 weeks by July 2016, increasing to 90% by June 2017. Results cover those patients who received their first cancer treatment between July and December 2015. Find out more about this target.

Results summary: Performance in the Faster cancer treatment target increased by 5.4% compared with last quarter to 74.6% based on six months rolling data (July to December 2015). This is the biggest quarterly increase in the health target to-date and is an increase of 8.8% since the target was first published 12 months ago. No DHBs have yet met the 85% target. 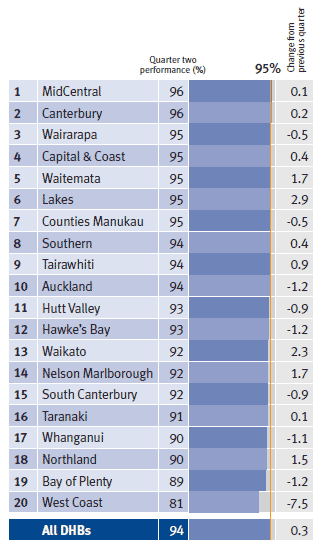 The target: The national immunisation target is 95% of 8-month-olds have their primary course of immunisation at 6 weeks, 3 months and 5 months on time. This quarterly progress result includes children who turned 8-months between October to December 2015 and who were fully immunised at that stage. Find out more about this target.

Results summary: The national coverage result for infant immunisation at eight-months of age was 93.7%. This is an increase of 0.3% when compared with quarter one and the highest coverage that has ever been achieved. Seven DHBs met the 95% target. 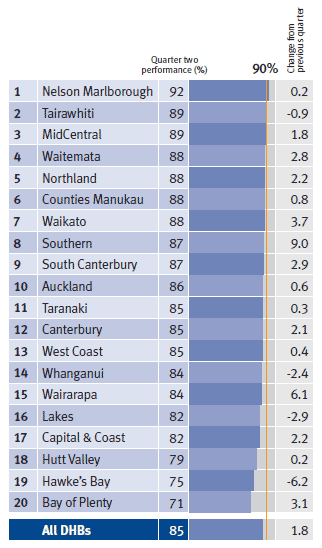 Results summary: The national Better help for smokers to quit primary care target result was 85.0%. From quarter one the target has shifted its focus to the entire enrolled population of people who smoke and not only those seen in primary care and covers advice provided over 15 months, instead of 12 months. As the definition for this target was revised last quarter this is the first time a quarter on quarter comparison will be presented. The national result shows a 1.8% improvement on the quarter one result. One DHB met the 90% target.

The hospital target is now only reported on the Ministry’s website along with the maternity results in the source data and individual target graphs for quarter 2. 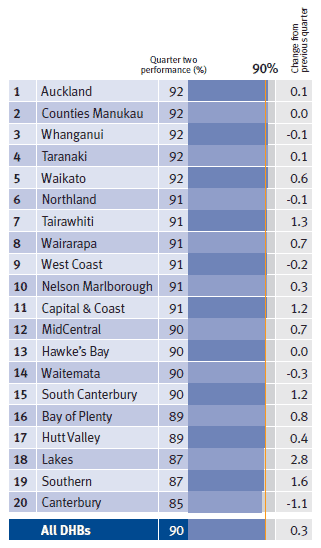 Results summary: The More heart and diabetes checks health target was met for the second consecutive quarter with a result of 90.0%. This is a 0.3% increase compared with the quarter one results. Fifteen DHBs achieved the target.