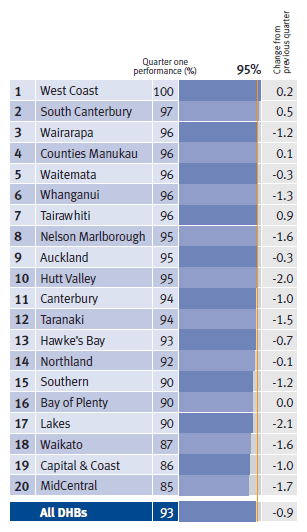 The target: The target is 95 percent of patients will be admitted, discharged, or transferred from an Emergency Department (ED) within six hours. The target is a measure of the efficiency of flow of acute (urgent) patients through public hospitals, and home again. Find out more about this target.

Results summary: National performance in the Shorter stays in emergency departments target decreased by 0.9 percent to 92.5 percent this quarter primarily due to pressure on services over the winter months. This result compares to 91.5 percent on the same period last year, and is the best quarter one performance since the target began. Ten DHBs achieved the target.

This quarter, four smaller hospitals have been added to the Shorter stays in emergency department target. 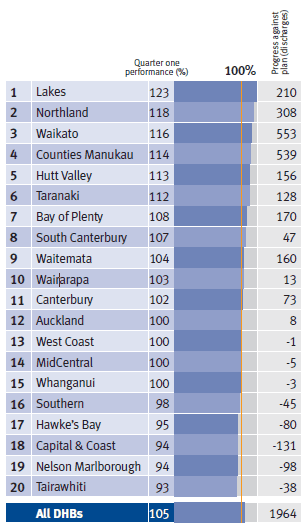 Results summary: The national Improved access to elective surgery target has been achieved, with 40,593 elective surgical discharges provided, against a target of 38,629 discharges. This is 1964 (5 percent) more than planned. Fifteen DHBs achieved their quarter one target. Eight of these are 5 percent or more ahead of their target. 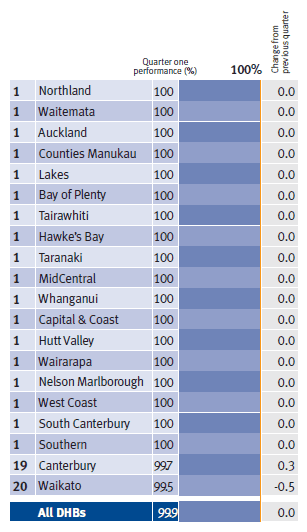 The target: The target is all patients, ready-for-treatment, wait less than four weeks for radiotherapy or chemotherapy. Six regional cancer centre DHBs provide radiation oncology services. These centres are in Auckland, Hamilton, Palmerston North, Wellington, Christchurch and Dunedin. Medical oncology services are provided by the majority of DHBs.

Results summary: All DHBs except Canterbury and Waikato achieved the Shorter waits for cancer treatment health target in quarter one 2013/14. The national result is 99.9 percent.

During quarter one 2013/14, three patients who were ready-for-treatment waited longer than four weeks, one for radiotherapy and the other two for chemotherapy. 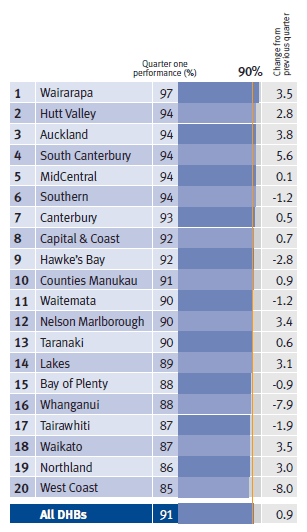 The target: The national immunisation target is 90 percent of eight-month-olds have their primary course of immunisation at six weeks, three months and five months on time by July 2014 and 95 percent by December 2014. This quarterly progress result includes children who turned eight-months between July and September 2013 and who were fully immunised at that stage. Find out more about this target.

Results summary: The July 2014 Increased immunisation health target has been achieved. The eight-month national immunisation coverage for quarter one is 91 percent, an increase of 0.9 percent on quarter four. During quarter one, 13 DHBs have achieved the target with at least 90 percent of eight-month-olds fully immunised. 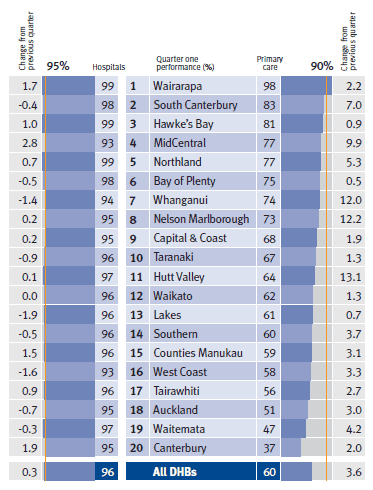 Results summary: The Better help to smokers to quit hospital health target was achieved for the fourth consecutive quarter with a result of 96.1 percent. Seventeen DHBs met the 95 percent target.

Results for the primary care target shows national performance has increased to 60.5 percent, compared with 56.9 percent last quarter. Although this result is still well below the target, it represents a significant increase on the quarter four results and an improvement of 21.0 percent since the primary care results were first published in quarter one 2012/13. 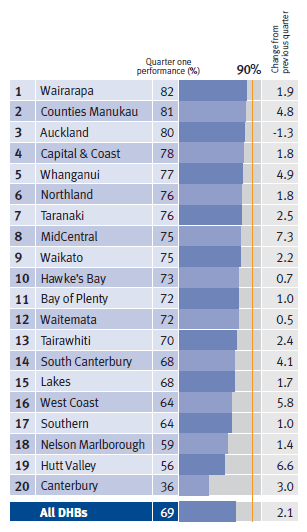 The target: This target is 90 percent of the eligible population will have had their cardiovascular risk assessed in the last five years to be achieved by July 2014. Find out more about this target.

Results summary: The national quarter one result for the More heart and diabetes checks target is 69 percent, an increase of 2.1 percent on last quarter’s result and a 17 percent improvement over the past year.